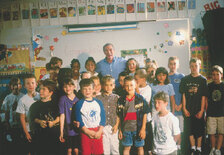 Posthumus’ most oft-stated educational goal is to have every Michigan child reading at grade level by the third grade. To meet this goal, Posthumus wants to pool the funds that support the state’s many programs for at-risk children into programs that would focus on teaching children to read. He wants to institute a government-funded campaign to find, hire and retain high-quality school principals who will take charge of failing schools and make them work. And he wants to initiate training programs for principals, similar to state-sponsored teacher training programs already in place.

The Republican candidate has called for greater state funding of pre-school programs, and, like his opponent, Democratic nominee Jennifer Granholm, wants to see the federal government pay for all the special education services it requires states to perform.

In Michigan, less than half of school employees are actually teachers—one of the lowest teacher-to-non-teacher ratios in the nation—a statistic many regard as an indicator of top-heavy bureaucracy. Posthumus says he wants to spend fewer school funds on administration, and more on what actually goes on in the classroom.

Posthumus regards Proposal A, the 1994 tax reform plan that shifted most education funding from local to state government, as a salutary measure because it lowered property taxes, reduced funding inequities between districts, and increased the amount of money going to Michigan schools. He opposes any attempt to raise local taxes by changing the proposal, which he has defended ever since he sponsored the plan in the early 1990s. In this, as on other tax issues, Posthumus points out that throughout his Senate career and as lieutenant governor, he has fought for lower taxes, which he believes have improved the economy and in turn provided a larger state budget for education.

Despite his historically unqualified support for school choice, Posthumus disavowed vouchers recently, saying also that school choice that includes non-government schools would not be a focus of his administration.

Posthumus helped establish both the Michigan Education Savings Program (MESP) and the Postsecondary Access Student Scholarship (PASS). The MESP is a state-run savings program in which parents can save tax-deductible funds for tuition, room and board, and other college expenses for their college-bound children. The PASS, which hasn’t shown the same degree of success as the MESP, is a state-funded scholarship program that pays tuition for low-income students trying to earn two-year degrees. Of the $10 million allotted for PASS this year, $8 million has been transferred to university maintenance accounts.

Critics of Posthumus say his refusal to change Proposal A will limit the ability of school districts to raise additional funding through increased taxes. Granholm says there is little Posthumus is trying to do that she hasn’t already done in her term as attorney general. Other critics are concerned about Posthumus’ refusal to make school choice programs such as vouchers or tax credits a part of his platform.