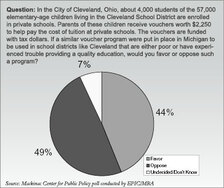 On June 27, the U.S. Supreme Court ruled that Cleveland’s school voucher program is constitutional. In the long-awaited decision, of Zelman vs. Simmons-Harris, the justices ruled 5-4 in favor of the voucher program, which provides publicly funded vouchers worth $2,250 to low-income parents to help send their children to a school of their choice. 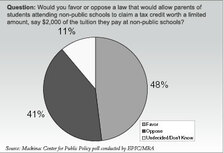 In the decision, Chief Justice Rehnquist wrote for the court, “[T]he Ohio program is entirely neutral with respect to religion. It provides benefits directly to a wide spectrum of individuals, defined only by financial need and residence in a particular school district. It permits such individuals to exercise genuine choice among options public and private, secular and religious. The program is therefore a program of true private choice.”

The decision came on the heels of a new Mackinac Center for Public Policy poll conducted by EPIC/MRA, which indicated that more Michigan voters oppose Cleveland-like vouchers than support them. The poll of 600 active Michigan voters conducted June 19-25 showed that 49 percent of the respondents are opposed to vouchers, compared to 44 percent in favor.

Support for education tax credits for scholarship granting organizations increases to 67 percent if the scholarships could be used for either public or non-public schools. Some Michigan public schools also charge tuition to non-district students, so such an education tax credit program would benefit students in those circumstances. Only 22 percent of Michigan voters are opposed to such a tax credit program.

In short, a majority of Michigan voters do not approve of Cleveland-like school vouchers, but they are in favor of education tax credits. The full results of the poll may be viewed at: https://www.mackinac.org/4435.

The entire decision in the case, Zelman vs. Simmons-Harris, can be read at: www.supremecourtus.gov/opinions/01pdf/00-1751.pdf. The decision clears the way for other cities and states to try similar school choice programs.

Davey said the 1999 voucher law violates the state constitution, which prohibits public money from going to churches or other “sectarian institutions.”

The voucher program, which is expected to provide $3,400 vouchers to hundreds of students this coming school year, allows students in failing schools to attend the school of their choice, public or private, including religious schools.

Although Davey’s ruling originally barred students from using the vouchers this year, the state sought and won an appeal to allow students to participate in the program until the Florida Supreme Court has the opportunity to review and issue a decision on the case.

The U.S. Court of Appeals, 9th Circuit, issued a decision on July 18 that may have significant implications for school choice programs around the country.

In Davey v. Locke, the court struck down a Washington state law that provides college scholarships to certain qualified students, but not to students who choose to study religion or theology. In the case, Joshua Davey (no relation to Judge Davey from previous article) was awarded a Washington state-sponsored “Promise Scholarship,” which was revoked when he decided to major in Pastoral Ministries at Northwest College, an accredited institution affiliated with the Assembly of God church.

This decision overruled a state constitutional provision that prohibits the state from giving money to religious schools. Since the state gave scholarship money to other nongovernmental schools in this case, the court held that the state could not discriminate against religious schools simply because of their religious viewpoint.

If upheld by the U.S. Supreme Court, states with such constitutional provisions would be unable to prevent religious colleges from participating in otherwise neutral school choice programs. In Michigan, the state constitution would likely survive judicial review, since it prohibits such funding for any non-government institution, not just religious institutions.