Back to the future

College looks to the past to train tomorrow's teachers 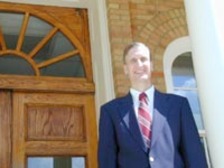 For years, educators, reformers, and politicians have struggled to explain the decades-long decline in American K-12 student achievement test scores. From a lack of education funding to too-high student-to-teacher ratios to too much television watching, it seems there are almost as many explanations for poor student performance as there are students.

But one small college offers an explanation that is as surprisingly different as it is simple.

"Education is not and has never been a discipline," says Dr. Robert C. Hanna, an associate professor of education and director of teacher education at tiny Hillsdale College in Hillsdale, Mich.

Following Hanna's philosophy, Hillsdale has designed a teachers' training program that focuses not on education as its own subject but on the different subjects that future educators should master before entering the classroom to teach.

According to Hanna, the time that achievement scores began to plummet- around the late 1950s and early 1960s- was about the same time many new educational theories like "whole language" reading and "new math" began to dominate the teachers' colleges and university departments of education that trained K-12 teachers.

Prior to these new theories, says Hanna, the prevailing opinion was that teaching was not a "discipline" like mathematics or English or biology. It was considered far more important for teachers to be expert in their subject areas than to learn about methods of teaching, which could be learned with the aid of a few classes and some on-the-job training.

"None of our students can major in education, and we do not have an education degree," explains Hanna. "Rather, all students at Hillsdale College who seek Michigan's teaching certificate must have an academic major and an academic minor."

K-12 teachers in Michigan schools must be state-certified, which means they have followed a state-approved curriculum that normally includes many classes on teaching theories and methods. Hillsdale's program for earning the state teacher's certificate is somewhat different than that of the nearby state university.

Hillsdale's and the state university's "programs are accredited by the Michigan Department of Education and both result in the student's earning the identical initial teaching certificate," says Hanna. "But Hillsdale College requires only seven education courses plus a practicum and student teaching, with no education major. [The state university] offers an education major with over 100 courses spanning undergraduate, graduate, and doctoral studies."

Hanna believes that "students would be far better off learning at more advanced levels the content they will be teaching rather than taking 'make-work' education courses." Colleges and universities, he adds, could also "save substantial amounts of money through the elimination of the salaries of the professors who teach unnecessary education courses."

"Our staffing is already in place for the additional liberal arts courses our students must take in place of unnecessary education courses," he says.

Is Hillsdale's teacher preparation program successful? Hanna notes it has enjoyed a 100-percent placement rate for the past five years. He says Hillsdale graduates are in particular demand by schools whose administrators are dedicated to combating what they see as an "education crisis."

Hanna says that education students from Hillsdale graduate able to

· teach children how to read through explicit phonics instruction;

· analyze curricular materials for errors, omissions, biases, and subtle or overt undermining of parental authority and values;

· evaluate educational reform practices and proposals using rules of argumentation, knowledge of fallacies, logic, statistics, and the scientific method; and

Hanna and the rest of the staff at Hillsdale College believe these traits are essential components of any plan to revive American education from its long decline. And while Hillsdale may be virtually alone in its diagnosis of the modern educational disease, it is confident that the future of teaching lies in the practices of the past.