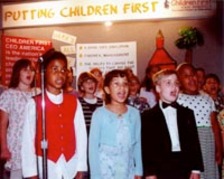 In May, more than 100 business leaders, philanthropists, and others gathered in Grand Rapids for the sixth annual Investors Summit meeting of Children First CEO America, the nation's largest provider of "opportunity scholarships"- partial scholarships for children of low-income parents, financed by private-sector contributors.

In attendance were representatives from prominent corporations, foundations, and public interest groups, all committed to helping low-income families afford to choose other schools if the local public school to which their children are assigned is failing.

Community leaders Dick and Betsy DeVos hosted the meeting, which opened with testimony by Jacqueline Robinson, a Detroit mother of seven whose children have benefited from opportunity scholarships. When Robinson and her husband decided on private schooling for their family, they were faced with tuition bills that would have eaten up two-thirds of their yearly income.

"We want to give our children the best as parents, but that's difficult to do when you don't have choices," said Robinson.

Choice came to the Robinsons through the Education Freedom Fund, the Michigan affiliate of Children First CEO America. Children First began in 1992 as the Children's Education Opportunity Foundation of San Antonio, or CEO San Antonio, with business and policy leaders providing scholarships.

CEO San Antonio was based on an Indiana scholarship program begun by Indianapolis businessman J. Patrick Rooney in 1991. After watching the Indiana legislature dismiss a voucher proposal, Rooney decided to act.

Responding to what he saw as a strong desire for educational choice on the part of parents, Rooney offered tuition aid to 500 low-income families who would have had no other options.

The satisfaction of providing hope to many who had none encouraged Dr. James Leininger and Fritz Stieger to launch CEO San Antonio the following year. Again, the response to partial scholarships exceeded expectations, allowing the organization to expand scholarships across Texas, and possibly beyond.

Things haven't slowed down since.

In early 1994, with the help of a $2 million private grant, the Foundation set up a national body, CEO America. Now known as Children First America, it provides support services, information, and funding for programs nationwide. Today, there are over 70 private scholarship programs across the country.

"What was once a 'fringe' issue, has now turned into a mainstream issue with broad-based support from all across the country," says Children First President Fritz Steiger.

The Michigan chapter of the organization had its beginnings in 1991, when then-Senate Majority Leader Dick Posthumus established the Vandenberg Foundation, a privately funded scholarship program aimed at giving low-income parents a choice in their children's education. In 1993, it became CEO Michigan and then in 1999 the name changed to the Education Freedom Fund (EFF).

EFF and programs like it operate on the premise that all parents, regardless of income, should have the opportunity to choose where their children go to school. While some parents can afford to send their children to private school or are able to move to a better school district, this choice is not available to parents with low incomes- the ones who need this option most.

EFF scholarships are awarded to children in grades K-8 from low-income families who qualify for the federal government's free or reduced lunch program. Recipients receive an average of $1,000 annually and their parents must provide a portion (at least $500) of private-school tuition; in Michigan this averages around $3,000.

The latest boost was a matching grant of $7.5 million from Children's Scholarship Fund (CSF), a nationwide trust set up by two philanthropists in 1998. This grant enabled EFF to award over 3,700 Michigan schoolchildren four-year scholarships in 1999. Despite the requirement that parents pay a portion of tuition, parents of one in five eligible children in Michigan nevertheless applied for a scholarship in 1999. More than 60,000 children were placed on a waiting list.

"EFF knows low-income families are every bit as concerned about quality education as anyone else. Our goal is to help more parents like Jacqueline Robinson who want a better education for their children but can't afford it without our help," says Executive Director Kevin Stotts.

Nationwide, the numbers are similar. CSF, which awarded 40,000 scholarships in 1999 with private donations of $170 million, received 1.25 million applications.

"Think of it: 1.25 million applicants asking to pay $1,000 a year over four years. That's $5 billion that poor families were willing to spend simply to escape the schools where their children have been relegated and to secure a decent education," says CSF chairman Ted Forstmann.

Jacqueline Robinson is thankful for the EFF scholarships, which she says answered her family's prayers. She explains, "I find it strange that people feel that you should have a choice about minor things in life . . . but yet, when it comes to education, there are those that tell us that parents should not have choices."