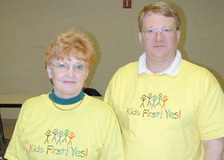 Van Buren Public Schools board members Vesta Losen and Tom Bowles expressed their support of school choice at a recent board meeting. "Children are my first priority," says Losen. "If a child is not being served by our district, then he or she should be given the opportunity to find a better school."

School vouchers have been a contentious issue within the public education community for years, but with Michigan headed for a vote on vouchers in November, the line between supporters and opponents is being drawn ever sharper.

On April 10, Van Buren Public Schools board members Vesta Losen and Thomas Bowles raised eyebrows by attending a school board meeting wearing t-shirts emblazoned with a "Kids First! Yes!" logo. Kids First! Yes! is the coalition promoting an amendment to the state constitution that would remove the ban on tuition vouchers enacted in 1970. The proposal also would require public school teachers and teachers in private schools that accept vouchers to take competency tests. In addition, the proposal would establish a minimum level of per-pupil funding by the state.

"I believe we are elected to represent the best interests of all children," Losen told MER. "If a child is not being served by our district, then he or she should be given the opportunity to find a better school."

But Bowles and Losen's support for voucher initiative puts them at odds with Van Buren's board president Karl Gorham, the Michigan Association of School Boards (MASB), and many of their peers.

"Although the board has not taken an official position on the amendment, I am personally opposed," says Gorham. "First of all, private schools in the area do not have the capacity to accommodate additional students and we already have teacher testing. We don't need any more."

Gorham says Van Buren Public Schools, which encompasses the community of Belleville, hosted a public forum where presenters from both sides of the issue debated the ballot initiative. He doesn't expect the district to take an official position until the November election draws nearer.

Bowles cites MASB's position against school choice as one reason he formed the Michigan School Board Leaders Association (MSBLA), an organization for school board members in both public and private schools. MSBLA's Web site (www.msbla.org) emphasizes that, "School Board members are not elected to serve schools. They are elected to ensure that schools serve children and parents."

"That is what I'm all about and why I am working with Tom and MSBLA," says Losen. "Children are my first priority. And unfortunately, I frequently find them short-changed by the system."

Bowles and Losen are serving their last term as board members and have decided not to run for reelection this June.

Bowles ran four years ago with the hope of improving the financial situation in his district. "When I ran for trustee, I was an outspoken critic about many financial aspects of our system," he told MER. "It doesn't take a genius to recognize that cutting the grass and shoveling snow should not cost $30 per hour, which is what it costs our district."

"My choice to not seek reelection is not because I have abandoned my reasons for running in the first place," Bowles says. "On the contrary, I just figured out I cannot change things from within the system."

Bowles claims that he has no intention in changing "the educational model from what others think works to what I think works.