Says school choice must benefit all students or none 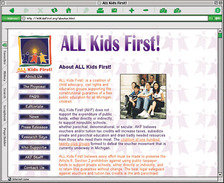 ALL Kids First! is expected to spend millions of dollars, including $750,000 from the National Education Association to prevent Michigan children from receiving state-funded K-12 tuition vouchers.

For months, Michigan citizens have been reading news stories about Kids First! Yes!, a group gathering petitions to place a school voucher initiative before voters in November.

But as summer approaches, temperatures won't be the only thing heating up in the Great Lakes State.

ALL Kids First!, an organization formed to counter the voucher drive, is laying plans to derail the momentum of the school choice movement.

"[Kids First! Yes!] said for weeks that they had the signatures, we knew they were going to file, the next step is waiting for the Secretary of State to verify the signatures on the petition," says Michael Emlaw, vice-chairman of ALL Kids First!. "Once that happens, this campaign is going to heat up by about a thousand degrees."

According to its Web site, "ALL Kids First! is a coalition of child advocacy, civil rights and education groups supporting the constitutional guarantee of a free public education for all Michigan children." It opposes the use of tuition vouchers or tax credits at private K-12 schools, saying they will "increase taxes, subsidize private and parochial education and drain badly needed resources from those who need them most."

"We've definitely been concentrating on getting organized and strategizing in anticipation of this moment," says Georgene Campbell, chairman of ALL Kids First! and former Michigan PTA president.

"We're ready for the upcoming battle. Our top priority is to make sure every child in Michigan has access to a great school." That means defeating the voucher initiative, she says.

ALL Kids First! lists over 120 organizations as supporters of their effort, including more than 60 school districts, 60 chapters of the PTA and NAACP, two dozen government employee associations and unions, the People for the American Way, and the Michigan chapter of the American Civil Liberties Union.

Other members of the anti-voucher coalition include the International Electronic, Electrical, Salaried Machine and Furniture Workers and groups like the Triangle Foundation, a Michigan-based "organization for gay, lesbian, bisexual and transgender people."

"The gay opposition to vouchers is that we don't want private schools to be able to receive government funding without having to abide by equal-access laws," Sean Kosofsky, a spokesman for the Triangle Foundation told MER. "Private voucher schools could be exempted from mandates that schools allow gay-straight alliances," says Kosofsky. These are clubs on school campuses aimed at fostering a "dialogue" between hetero- and homosexual students, he says.

At press time, the State Board of Canvassers had not yet approved the Kids First! Yes! petition, but it appears that it will survive any ballot access challenges.