GVSU Is a Charter School Leader 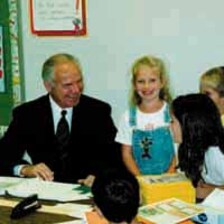 GVSU's Pat Sandro checks up on students at Chandler Woods Charter Academy in Belmont. Chandler Woods is among the newest of 22 National Heritage Academies, which last summer had nearly 1,200 students on waiting lists.

In December 1993, Michigan became the ninth state to pass legislation permitting the creation of charter schools, independent public schools that operate under "charters" granted by authorizing bodies such as public universities.

Today, 36 states have charter school laws and Michigan, with 174 schools, is fourth behind only Arizona, California, and Texas in the number of operating charter schools.

At the forefront of the state's charter school boom has been Grand Valley State University (GVSU), a four-year public university located in Grand Rapids.

"Our board of trustees believes that a university with a school of education should appropriately be involved in charter schools and education reform," says Pat Sandro, charter schools special assistant to the president of GVSU.

"I officially started on June 5, 1995, when I took three charter school applications to the board for approval," recalls Sandro. "The board accepted my recommendations and we chartered all three schools."

In return for chartering and overseeing the schools, GVSU receives three percent of the state aid payable to each school, which works out to roughly $180 per student.

"We have limited ourselves to authorizing schools within a 75-mile radius from the university," says Sandro. "This allows us to remain in close contact with all of our schools."

But plans for a Detroit office are currently in the works, he adds. "A number of GVSU students come from the metro Detroit area, and having a Detroit presence would permit many of our education students to do their student teaching at a GVSU-chartered school. This would allow them to live at home and save money on housing and other college-related expenses."

Student teaching, a graduation requirement for all GVSU education students, allows prospective teachers to work alongside a veteran teacher for a specified period of time. The 1999-2000 school year is the first year that GVSU student teachers will be in charter schools.

Initially, the education department at GVSU was skeptical of the university's involvement with charter schools. "Some were outright anti-charter school," remembers Sandro. Some school districts even threatened to reject student teachers from Grand Valley State. Saginaw Valley State University had received such a threat in writing from the Michigan Education Association (see letter at www.mackinac.org/9405).

"As one of the primary providers of teachers in the state, there was great concern on the part of the faculty. They were rightfully worried about their ability to place students in the public schools." Although apprehensions still exist among the faculty and the Grand Rapids school district, Sandro believes that those in the education community have become much more accepting of charter schools.

One of the reasons given for opposition to charter schools is the belief that competition is bad for education. Sandro disagrees.

"I think the analogy of the automobile industry is good," he says. "Americans were not happy with American cars and so they started buying foreign cars. The result was that Chrysler almost folded when nearly 25 percent of all cars in America were foreign-made. But they went back and said, 'Look, we need to get better.' And they did.

"Today, the American product is excellent," he adds. "That never would have happened without outside pressures from a competitor."

Competition for students in Michigan is still quite limited. Charter school students account for only 2 percent of the public school population- far from the level of competition experienced in the auto industry.

"I don't know what we'll end up with, 5 or 10 percent of the kids," says Sandro. "But if we do, I think that will be significant. That's when we will see the benefits of competition in education."