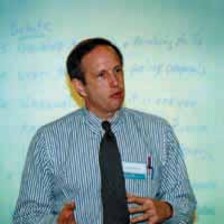 Should the federal government try to improve academic achievement in U. S. education or should education remain a state and local responsibility? Does Washington have constitutional authority to create educational programs, even if the programs- including presidential candidate George W. Bush's federal voucher proposal- promise greater school choice for families? What do economic principles suggest about government's role in education?

These are some of the issues raised by students, teachers, and a panel of debate experts at the Mackinac Center for Public Policy's 12th annual High School Debate Workshops, held at five locations throughout the state from September 29 through October 7. 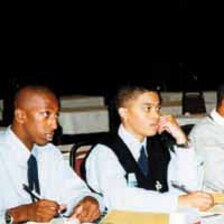 This year, nearly 650 students from 39 Michigan schools came to sharpen their debating skills and gather information on this year's national high school debate topic: whether the federal government "should establish a policy to significantly increase academic achievement in secondary schools in the United States." The National Forensics Association chooses the topic each year to be researched and debated by more than 100,000 top students in Michigan and across the country.

The workshops were held in Jackson on September 29, Livonia on September 30, Grand Rapids on October 5, Grayling on October 6, and Midland October 7. Students and coaches learned facts and techniques from experts including David Beers, a consultant for the Foundation for Economic Education (FEE) in Irvington, New York, and a high school debate coach; Gary Leff, director of development for George Mason University's Institute for Humane Studies and a former California state championship debate coach; Gregory Rehmke, director of FEE's High School Speech and Debate Program; and Matthew Brouillette, associate director of education policy at the Mackinac Center for Public Policy in Midland and managing editor of Michigan Education Report.

Workshop speakers provided students with instruction in basic economic principles as well as information packets of articles, essays, and commentaries to develop students' understanding of the importance of incentives in areas from commerce to higher education to secondary education policy.

"These workshops have been a key part of the Mackinac Center's educational mission for more than a decade," said Workshop Director Catherine Martin. "They help students by arming them with theoretical as well as empirical arguments and information to give them a complete picture of an issue."

Discussion revolved around issues at the heart of a 2000 school voucher ballot proposal in Michigan as well as proposals that will figure in the upcoming presidential election, including Republican candidate George W. Bush's call for a federally controlled voucher system for the nation's schools.

Students and coaches alike walked away from the program with valuable information to help them in the upcoming debate season.

"I can't believe how much information my students and I received for our case," said Bethanie George, debate coach at Lakeland High School in White Lake.

"[The workshop] provides young people and future leaders with knowledge and skills necessary to succeed," said Maria French, one of George's students.