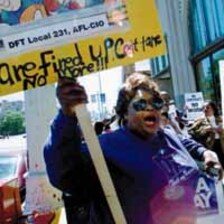 School started late this year for 180,000 Detroit students as their teachers picketed over contract changes including a proposal to tie teacher salary to student performance. Legislators are looking for ways to strengthen the law that prohibits government employees from striking.

The September strike of the 11,500-member Detroit Federation of Teachers (DFT) is the first major test of a law designed to deter public employees from illegally engaging in work stoppages.

But Michigan legislators have discovered the law is more bark than bite.

Public Act 112, passed by the legislature in 1994 and upheld by the Michigan Supreme Court in 1996, stipulates that striking teachers be fined one day's pay for each day they refuse to work. However, fines can be imposed only by the school district, and Detroit Public Schools Interim CEO David Adamany declined to do so.

Adamany's decision not to levy fines on striking teachers prompted some state lawmakers to advance new legislation that would allow parents and the Michigan Employment Relations Commission to seek such penalties.

"We have to come up with a very narrow bill that closes the loophole so we don't have school districts striking in the next few weeks," House Speaker Charles Perricone (R-Kalamazoo Township) told the Detroit Free Press. The bill under consideration is House Bill 4843, introduced by Rep. Paul DeWeese (R-Williamston).

"The Detroit situation shows us that the prospect of fines has not been a sufficient deterrent to dissuade teachers from taking matters into their own hands, contrary even to the recommendations of their union," said Robert Hunter, director of labor policy for the Mackinac Center for Public Policy and former member of the National Labor Relations Board. "Other measures should be taken to guarantee the public's need for uninterrupted services."

The September strike occurred under unusual circumstances. DFT President John Elliott did not lead the charge to the picket lines, instead favoring a contract extension and further negotiations. At an August 30 meeting, however, members of the union rejected Elliott's position, setting the stage for the strike that affected 180,000 students.

The vote also surprised Adamany, who said the district had given the union 85 percent of its requests concerning wages and 90 percent regarding periodic raises.

The teachers, however, expressed concern over the issue of class size, which equals 21 or more students in many Detroit classrooms. They cited studies that link smaller classes to greater academic success and demanded immediate action, rejecting Adamany's suggestion that a committee establish a cost-effective means of achieving this goal by the fall of 2000.

The district's proposal for merit pay, through which the district would reward teachers in schools whose students perform satisfactorily on standardized tests, was also a point of contention. Teachers argued that the plan would unfairly hold them accountable for the performance of students of other teachers.

Another point of contention involved the use of sick days. Detroit teachers had negotiated 15 sick days per year, but the board believes that some teachers use these days when they are not actually sick.

Detroit teachers use an average of 10 sick days in each 182-day school year. A Detroit Free Press investigation found that on any given day, 880 of the district's 7,700 teachers are absent, or over 14 percent of the teaching staff. Additionally, teachers may accumulate unused sick days throughout their careers, prompting some to use them for extended breaks just prior to retirement.

To combat these absences and the resulting $40 million annual budget for substitute teachers, the district said it would withhold an annual raise to any teacher who uses more than eight sick days in one school year, absent a physician's excuse or other compelling reason. The teachers claimed that this proposal would deprive them of necessary benefits, especially given their lack of disability insurance.

Finally, the teachers objected to the district's plan to extend the school year and add two hours to each school day.

The three-year agreement limits class sizes to 17 students in 44 elementary schools in grades kindergarten through third. Merit pay was dropped by the board, though Adamany has suggested that the district could implement the plan without union approval. Finally, the accord rejected the district's idea of extending the school day and lengthening the school year, but it did include the district's plan to deter the excessive use of sick days.

DFT members ratified the agreement on September 24 by a margin of more than three-to-one, 6,328 to 2,058. "I'm satisfied," Elliott told The Detroit News. "I'm encouraged by the vote and the margin of the yes and no."

Not every member of the union shared Elliott's sentiment, however.

In addition to critiquing various aspects of the agreement, some teachers criticized the methodology of the vote itself. The ballot asked teachers either to approve the contract or to reject it and "withhold" services.

Steve Conn, a Cass Technical High School teacher and a vocal opponent of Elliott, told the News that this implicit threat of a second strike may have led to the ballot's passage.

"It's flat-out untrue that we would be on strike [if the ballot had failed]," he said. "I think if it was a fair yes-no vote, it would have been much closer."

Elliott dismissed this criticism by indicating that the language in dispute has appeared on every such ballot since the 1970s.