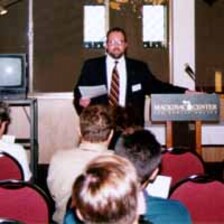 The Kalamazoo Gazette recently reported on an unusual couple: Marty and Beth Green, two public school teachers who fervently support public education- but who are home schooling their two children.

Marty Green is an eighth-grade science teacher in Plainwell Community Schools, while Beth Green quit her job as a teacher and counselor several years ago to be a stay-at-home mother to the couple's children, Ben, 7, and Abby, 4.

"We really struggled with this, especially since Marty and I are public school educators and we wonder what kind of message we're sending," Beth told Gazette reporter Julie Mack. "This is a decision based on family and lifestyle rather than a negative reaction to public education."

Mack reports that "home schooling appealed to the Greens' desire to build a life centered around family and to their eagerness for a curriculum that doesn't push academics at an early age." "We pondered this for many years," said Beth. "I didn't want to look back years from now and feel bad about not doing it."

Once viewed as a radical "fringe" movement, the home schooling community has grown nationally to more than one million today from 300,000 families in 1992.

What are the reasons for the surge in home schooling? Advocates cite a number of reasons including growing dissatisfaction among many parents with the quality of the public education system and the values it instills in students. Also, in the wake of widely publicized school shootings, parental concerns about safety in the public schools have contributed to an increased number of children being taught at home.

Many times, parents who want to opt out of the system are unable to afford tuition at a private school, leaving home schooling as their only option. Another selling point: the many success stories involving home schooled students who score extremely well on achievement tests and have been admitted to Ivy League colleges.

According to critics, however, home schooling parents have some difficulties to overcome. These include the almost overwhelming commitment and skills parents need in order to succeed and the potential for stunting children's social development. There is also the concern that once a child reaches a certain level- in math, for instance- another adult will need to be brought into the process.

It was these very considerations that last year led Beth Green to join forces with two other neighborhood families, Beth and Scott Luppe and Susan Button and Bill Blake, to form their own school called The Greenhouse, according to the Gazette.

Mack reports that the three mothers, who have a total of six children aged 3 to 7, meet three days a week in the Greens' home for lessons, with every Friday set aside for field trips. They are using the Waldorf education system, developed at the turn of the century by Austrian scientist and philosopher Rudolf Steiner, which stresses "holistic development of spirit, body, and soul."

Although the mothers divide teaching assignments, the school has been an enormous undertaking, Beth Green said. "I've just been consumed by it. . . . I'm not sure I would continue if I wasn't doing this with two other families."

At the same time she says home schooling has "been a wonderful experience," both in providing the kind of education she wants for her children and in creating a sense of community with the other families.

"I'm thrilled and totally comfortable with this decision," Beth told the Gazette. "I'm not only intimately involved in [my children's] education, but it allows us to put our family at the center of our lives in a way that often doesn't happen in our hurried-up society. That in itself is a benefit."