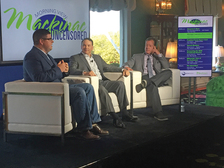 Each year, before the Detroit Regional Chamber’s Mackinac Policy Conference, we have some homework to do:

Despite the disclaimer, we do play an important role as a voice for free markets and limited government during the four-day event. This year, our president, Joseph Lehman was one of the Michigan leaders previewed in The Detroit News by Chamber CEO Sandy Baruah and conference chair Stephen Polk. Lehman delivered on that leadership twice from the conference stage.

In his first session, Lehman shared the stage with Lt. Gov. Brian Calley; Hudson-Webber Foundation President and CEO Melanca Clark; and Amy Liu, vice president and director of the metropolitan policy program at The Brookings Institution. Detroit Free Press columnist Rochelle Riley moderated their wide-ranging discussion on closing the economic opportunity gap for Michigan residents. Lehman’s explanations of opportunity-destroying government policies such as unnecessary professional licensure had even the other leaders on the stage asking for follow-up information on the Mackinac Center’s research and policy work on this topic.

Those wishing to change Michigan’s term limits or move the state to a part-time legislature may want to first focus on restoring and improving the public’s trust in government. During his second session, Lehman proposed a way to do just that.

The District Voting Option would let legislators spend more time among constituents and less time among special interests in Lansing by allowing them to vote remotely from their home districts.

“Legislators who choose more time at home instead of at the Capitol could find a healthier balance of influence from constituents versus Lansing-based special interests,” Lehman said. “Right now, the lawmakers go where the lobbyists are, which is convenient for the lobbyist. This would change that to some extent.”

Lehman presented the idea during a discussion with former Senate Majority Leader Randy Richardville at the Detroit Regional Chamber’s annual event, the Mackinac Policy Conference. Richardville called for an extension of Michigan’s term limits, while Lehman noted that voters first must trust their representatives before they agree to give them more time in office.

The District Voting Option could achieve this.

“The idea of being able to vote from home, I like it as long as you give leadership the opportunity to say, ‘We have an important vote … I need you in the Capitol at these times,’” Richardville said.

The voluntary option would need to be approved by voters through a constitutional amendment. Michigan’s Open Meetings Act also may need to be changed to implement this idea.While we rarely spend much time at conferences, this one is important. Big-business and big-government champions of corporate welfare schemes regularly dismiss our opposition as “philosophical” objections that have no bearing on the real world. The opportunity to show an audience of business and government leaders in person that we’re the ones with research, history and facts on our side is worth the drive up I-75.