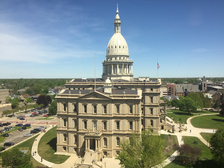 There was no change in the Michigan governorship or Senate after last year’s election, but much of the state House turned over. Several big legislative issues were resolved, for better or worse, at the end of 2016, including a package on energy.

But 2017 greeted lawmakers with much to do. Here are some of the bigger issues that have been taken up so far.

With the passage of major pension reform, Michigan has become a national leader in preventing politicians from racking up debt (see our cover story for more details).

The state passed an 18-bill package to eliminate outdated rules, roll back technical laws that put people in prison and fund rehabilitative services. Crime is very expensive, both from a financial and societal perspective. These bills are likely to lower the number of people heading back to prison.

The House and Senate have passed a bill limiting some state agencies from adopting rules more stringent than the federal government’s. A similar measure was vetoed in the past by Gov. Rick Snyder, but with more loopholes in the legislation now, he may sign it once it gets through the Senate again.

There is good and bad news here. Next year’s budget continues some programs that should be eliminated, and it has a whole host of “Christmas tree” items, or spending provisions specific to one community or lawmaker. But it allocates more money to transportation and pension liabilities than ever before and holds spending at or below inflation for most areas.

In the past few years, the Legislature has passed major education reforms, including tenure reform, merit pay provisions, bans on automatic union dues, transparency laws and right-to-work. Unfortunately, hundreds of school districts have provisions in their union contracts that ignore these laws. We have represented teachers when their union ignores the law, but we can’t help everyone. That’s why it’s important for this year’s budget to include a financial penalty for school districts that agree to contracts that violate state laws.

That’s a good start. But the Legislature has also floundered on other priorities. Even with a Republican majority, the House wasn’t able to pass a small income tax cut. The Senate, with a GOP supermajority, didn’t even try. Both chambers passed a package of brownfield bills, which will give large developers subsidies. The Senate and governor are pushing another package that will allow select large companies to collect the income taxes of their employees. This unfair system has been a failure in the past. In the meantime, taxpayers aren’t allowed to see who is already receiving hundreds of millions of dollars in corporate welfare. They’re also kept in the dark about reports justifying the Pure Michigan advertising program.

Lawmakers are on break for the summer and will return in September. There are other major priorities they should move on then. Bill packages related to occupational licensure and civil forfeiture are being worked on, with some pieces of legislation already introduced. The state should allow workers represented by unions to vote regularly on that representation, as happens in other states. Legislation preventing unions from forcing taxpayers to cover the cost of their work should be passed. A law to ban union pension-spiking schemes should be a no-brainer, but the idea died in the House last year.