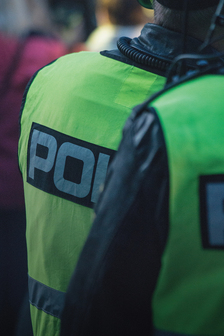 One sunny June afternoon, a quiet Portage residential neighborhood was suddenly overtaken. Police officers, K-9 units and SWAT teams restricted traffic to the block and descended on one of the homes.

Neighbors described the incident as surreal, and told reporters that they were shocked to see Portage police officers, the Michigan State Police and the Kalamazoo Metro SWAT Team swarming a home in their peaceful neighborhood.

SWAT stands for “special weapons and tactics,” and, according to the Kalamazoo Department of Public Safety, the regional SWAT team is a highly trained unit whose purpose is to “respond to and resolve critical and dangerous incidents exceeding the normal capabilities of law enforcement.”

Their critical and dangerous mission in Portage that day? To serve the husband of a missing woman with a warrant to search their home. Law enforcement officials wanted to talk with him about her disappearance, and he had been in contact with police detectives and under investigation for weeks already. The police completed their search without incident and left the home without arresting him.

The circumstances of this event prompt the question of why officials thought it necessary to deploy a tactical unit to serve a search warrant, especially given that the subject of the search was already well-known to them. It’s a question that critics of a trend known as police militarization find themselves asking more often as the use of SWAT teams for routine police activities grows dramatically.

Police militarization refers to the growing number of local police departments nationwide that are adopting military-style tactics and practices. These departments may train alongside soldiers, obtain military-grade weapons and vehicles, and adopt a battle-ready internal culture that can strain a department’s relationship with its community and raise the risk of violating civil rights.

Experts blame the war on drugs for instilling a warrior mindset among police officers. Police now routinely launch surprise raids on private residences with the help of armored vehicles, AR-15 rifles, body armor, battering rams and flash-bang grenades designed to stun victims. Thanks to civil asset forfeiture, many police departments benefit financially from these searches, though they only turn up drugs about half the time.

It is now commonplace for paramilitary strike teams to perform what should be normal civilian police tasks, although nobody is sure how many raids occur each year. One documentary filmmaker reported that the annual number had escalated from around 3,000 in the 1980s to between 50,000 and 80,000 today. Maryland was the first state to pass a law requiring SWAT teams to report how often they are deployed. As a result, Marylanders learned that 4.5 SWAT raids are performed each day in their state.

Michigan should enact SWAT reporting requirements of its own. If our state were following national trends, it now could be deploying paramilitary units at a rate 25 times more often than in the 1980s. In 2013, lawmaker Tom McMillin introduced a bill that would have given Michiganders data about SWAT deployments in the state, but it died in committee.

Lawmakers should resurrect this legislation. Whole books have been written about the rising use of strike forces and the corresponding growth in botched raids that end with the deaths or near-deaths of innocent people and family pets. These events turn neighborhoods into battlefields and civilians into enemies; that’s a far cry from a local police department’s duty “to serve and to protect.” Michiganders deserve to know whether, in an age of increasing distrust in the police, violent home invasions are the most effective method of conducting investigations and enforcing the law.