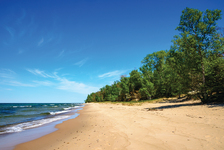 The Mackinac Center for Public Policy saw two of its ideas regarding the state’s Pure Michigan tourism subsidy program gain a foothold in Lansing during the last quarter. The program finances advertising for the state’s tourism industry with public dollars. Two lawmakers called for an independent investigation into the program, and then a few days later, a third called for eliminating the program’s funding altogether.

The first action was taken by state Reps. Steven Johnson, R-Wayland, and Martin Howrylak, R-Troy, on April 28 with a letter to the Auditor General of Michigan. The representatives called on the office to investigate the methodology used by the Michigan Economic Development Corporation’s contractors. One of those contractors, Longwoods International, calculates an alleged return on investment for Pure Michigan but refuses to precisely explain how the ROI calculation is made.

Mackinac Center scholars Michael LaFaive and Michael Hicks have written extensively about this over the past two years, pointing out that such secrecy violates one of the most basic tenets of scholarly publication: transparency. That’s unacceptable because the MEDC uses the ROI numbers to justify $34 million in annual public expenditures for the tourism industry. In essence, the agency is telling lawmakers and the public: “This is an effective program and you’ll just have to accept our word for it. Now give us more money.”

The lawmakers, by contrast, think state auditors ought to investigate the methodology used by the MEDC’s contractor or conduct their own study into Pure Michigan’s efficacy. LaFaive and Hicks have long suggested that lawmakers prohibit the MEDC from being the agency that hires the contractors used to evaluate its programs. The agency has an incentive to game the evaluations to make its own programs look good — and has a record of doing so.

In March, LaFaive watched Rep. Jim Tedder, R-Clarkston, ask a reasonable question about Pure Michigan’s effectiveness to two representatives from the state’s “jobs” bureaucracy. Tedder, who chairs the House Tax Policy Committee, asked at a public hearing know how the ROI claims are quantified. The response to Tedder by Jeremy Hendges, chief deputy director of the Michigan Department of Talent and Economic Development, was basically inaccurate.

Hendges claimed that the state had Michigan State University double-check the work of Longwoods. The problem with his assertion is that the validation study was performed on a Longwoods analysis of state advertising that predated Pure Michigan. The validation work of that earlier campaign, too, was full of problematic assumptions and conflicts.

LaFaive, director of fiscal policy for the Mackinac Center, explained all of this in response to Hendges in an April 18 online essay titled “Dear House Tax Committee: Pure Michigan Return on Investment Not Validated.” He personally emailed a link to that essay to each member of the committee, of which Johnson and Howrylak are members. His essay may have been the inspiration for the representatives’ request that the Auditor General get involved in a review of Longwoods methodology, if not the program itself.

On May 2, the Pure Michigan program got another wake-up call when state Rep. Henry Yanez, D-Sterling Heights, introduced an amendment during budget discussions to eliminate wholesale the $34 million previously recommended for it. The amendment was voted down in a voice vote, but the Mackinac Center viewed its very introduction as a step forward in the long-running debate over the efficacy of the program.

In November 2016, the Mackinac Center released a study demonstrating that state funding for tourism promotion was an ineffective development tool. Specifically, Center scholars found that for every $1 million increase in state promotion expenditures, there was a corresponding rise of just $20,000 in economic activity in the accommodations industry of the average state, including Michigan. This represents a huge negative return on investment.