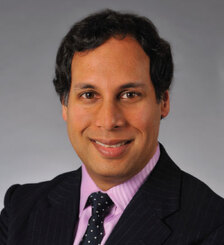 (Editor’s Note: This article was published in the print edition of IMPACT the same day as this event. All quotes from participants occurred before the event took place.)

Avik (pronounced O-vick) Roy, senior fellow with the Manhattan Institute, spoke at an Issues & Ideas forum at noon on April 18 in Lansing about the push under Obamacare to expand Medicaid in Michigan. The talk was held at the Michigan Restaurant Association headquarters.

“Michigan legislators are being pressured by everyone, from Gov. Snyder to the White House to lobbyists, to expand Medicaid,” said Jack McHugh, senior legislative analyst. “Doing so would increase the program to 320,000 people by next year and more than 470,000 by 2021.”

The White House has said the federal government will cover 100 percent of the cost for three years, then gradually reduce that amount until the state is on the hook for 10 percent of the cost starting in 2020. McHugh said a recent report from the Heritage Foundation indicates that such an expansion would cost Michigan taxpayers an additional $1.3 billion by 2022.

If legislators do not expand Medicaid, eligible low-income families would still be able to get insurance through an Obamacare “exchange” that the federal government will set up and run in Michigan. Unlike the Medicaid expansion, 100 percent of that cost would come out of the federal budget.

What Roy and others warned about, and there is hard evidence of this occurring in other states, is that the projections for how many people will sign up for the expanded Medicaid program — particularly childless adults — are too low. McHugh said that means the projected “savings” from the first three years, when no state money is required, will not, as Gov. Snyder and others believe, be enough to cover the state’s portion once it starts paying the full 10 percent in 2020.

Roy has also written at National Review Online that expanding Medicaid might actually harm those it is intended to help. The program reimburses doctors far less than private insurance companies do, meaning that fewer doctors are willing to accept Medicaid patients.

For more information and a video of the event, please see mackinac.org/18414.