Increasing Transparency — One Contract at a Time 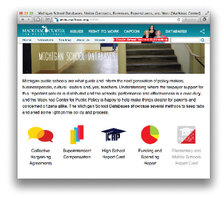 Along with superintendent compensation, the Mackinac Center maintains other easily accesible databases for collective bargaining agreements, high school report cards, funding and spending reports and (coming this summer!) an elementary and middle school report card. All of them can be found at mackinac.org/10361.

Some people react with outrage when they learn what some public school superintendents get paid. Others believe school boards get a great bargain for what they pay these CEOs who command multi-million dollar operations. Either way, what these public employees get paid is a topic of interest to many people. For that reason, the Mackinac Center recently created and released a free online database of superintendent compensation that covers all public school districts in Michigan.

This new tool allows users to quickly call up the compensation of any superintendent in the state, and compare his or her pay to that of nearby districts or districts of a similar size. Listed separately is the amount paid in salary, health benefits, pension payments, other retirement contributions and travel stipends. The number of allotted sick and vacation days is also provided, as is a link to a copy of each superintendent’s actual employee contract with even more details.

The value of this database was made evident right out of the gate. After just a few days of being made available, it generated nearly 50,000 unique online hits. It accounted for about 63 percent of all traffic to Mackinac Center Web sites for these days, and has accumulated about 85,000 total unique views in just under a month.

Michael Van Beek, director of education policy for the Center and project manager for the database, also received dozens of phone calls and e-mails from superintendents, reporters and other concerned citizens about the database. Many of them praised the Center’s effort.

The media reported on this new database extensively. A particularly valuable asset the database provides reporters is the ability to quickly compare the compensation of superintendents in one geographical area — their circulation or broadcast area, for example. A host of news stories popped up that took advantage of this function.

The popularity of this new database has also helped spark new interest in the other valuable information that the Mackinac Center makes available to the public on its Web site. Web hits of the Center’s other school-related databases — union contracts, funding and spending, and academic performance — all increased as a result of the superintendent database.

A lot of similar information is available on government Web sites, but unfortunately, much of it is difficult to find or only available in complicated Excel worksheets. The Mackinac Center makes this same information easy to find and makes sense of it.

What a school district chooses to pay its superintendent rarely makes or breaks its budget. In fact, it accounts for less than 1 percent of what districts spend statewide, on average. But as CEOs of tax-funded entities — the largest government agency in many Michigan communities — superintendents should be held to a high level of accountability. This isn’t to say that superintendents are generally overpaid or underpaid (the average was about $155,000 in total compensation), but that it should be easier for taxpayers to assess the type of value they’re getting out of the superintendents they employ.

The addition of this new database means that even more Michiganders are finding valuable information on the Mackinac Center’s Web site. This perfectly aligns with our mission to better educate the public about policy issues.