Teachers Speak Out: The Aftermath of Right-to-Work 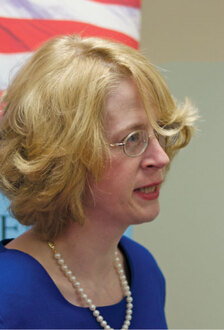 Angela Steffke is shown here at the press conference announcing her intentions to sue their union (along with two other teachers).

The recent right-to-work law passed in Michigan is having an unanticipated impact on public discourse: some teachers are now talking publicly about the contempt they have for unions. In fact, the shared sentiment from many of these educators is that the collective mentality of unions can rob teachers of their drive.

“When I got tenure, I was trying to be careful because I knew this would happen, I suddenly became less hungry,” says Rob Wiersema, an teacher at Hopkins High School in the Hopkins Public School district.

“I don’t know if it impacted student learning, but I know it impacted my behavior and I think the unions encouraged that,” he says.

Nor are many teachers cowering from explaining the deleterious impact of unions and school boards’ collusion to mismanage money. Teachers in Taylor Public Schools point to two independent studies that show how the district could save money by privatizing non-instructional services such as transportation and maintenance, currently handled in-house by union employees.

“There are not enough books to go around. There is a constant fight for supplies. In my first trimester, I had 36 students in my class,” says teacher Nancy Rhatigan, a self-described political liberal.

Rhatigan says she was excited at first when she landed a teaching job in a public school system. She looked forward to good benefits, pay and job security.  Now her employer, Taylor School District, is in financial turmoil. Teachers are getting laid off and have agreed to a 10 percent cut in pay.

Rhatigan, along with teachers Angela Steffke and Rebecca Metz, is suing the district and their union, the Taylor Federation of Teachers, over the deal which secured savings in teacher salaries in exchange for 10-year union representation. Under the right-to-work law, union members must wait for such agreements to expire before they can opt out of fees.

Teachers in Roscommon Public Schools recognized for years that their union, the Michigan Education Association, was not working in their best interest.

After 21 years, they managed to break off from the union and form their own collective bargaining unit.

“The MEA was expensive and not responding to our needs,” said Jim Perialas, president of the new Roscommon Teachers Association.

“With the help of the Mackinac Center and other nonprofit organizations, we were able to replace the services the MEA had done for us, and not very well,” he adds. In their first year, teachers are saving nearly 50 percent on dues and stashing away enough to have a $100,000 “financial war chest” in four years.

Dues have been a bone of contention for many teachers.  It is conceivable that a teacher could pay a union between $25,000 and $30,000 over the course of a 30-year career.

Even before right-to-work, teachers who wished to opt-out of the union could exercise their right to do so; however, they were obligated to pay a union agency fee, which the Mackinac Center has written about because the fees average 85-90 percent of the dues themselves.

Unions take credit for teacher salaries, which in Michigan rank in the top five nationally, and tenure clauses that for years protected teachers from being demoted or fired without a hearing from a tenure commission. But Wiersema thinks those things have made teaching worse, not better. He points out that unions have created such artificially high pay packages that it is creating droves of applicants for limited teaching jobs.

“I competed against hundreds of others who were equally qualified to do the job,” he says.  He felt like he won the lottery when he was hired, but lamented that students’ families invest time and money in teaching careers which have become a refuge for those who are attracted to the lucrative pay packages rather than invested in teaching.

Wiersema actually sat on a school board until he lost to what he says was a union-supported candidate. He also worked at a private school for several years before his public teaching job. He has been vocal about his views that public school teachers are overpaid, a position that does not sit well with his colleagues.

On the subject of preps, a separate teaching subject, Wiersema says there is a stark difference in work between private and public: “I went from being a private school teacher teaching six “preps” a day to Hopkins where I now do three.”

Equally disturbing to him is the public school pay system which rewards teachers by seniority and degrees. The Mackinac Center’s Michigan Capitol Confidential website has reported on several studies that show there is no correlation between level of college degree and teaching performance. Wiersema believes that the salary policies stifle innovation and thought by rewarding teachers for staying put in one place.

“I’ve been here 16 to 17 years.  If I were to try to go to another district, I would not be paid equally,” referring to the “step-scale” system that gives teachers as much as 10 percent raises for every “step” they reach over a period of years. The step increases are additional to bargained pay raises. Unlike many workers in the private sector today, teachers often stay with one employer for an entire career.

“My feeling is you don’t get as much cross pollination. You don’t get sharing and synergy,” says Wiersema.

The union-negotiated pay system can hurt in other ways. No matter how hard they work or how well they perform, teachers’ salaries are capped. Unions have long fought digital classrooms, where teachers could be rewarded by free-market forces. On-line educator Salman Khan has turned his teaching talent for math and science into a lucrative education enterprise.  Currently, if teachers want to earn more money, they must seek district administrative jobs, which remove them from teaching altogether.

With right-to-work, there will undoubtedly be increased worker freedom and accountability on the part of Michigan unions. The uncalculated benefit of worker freedom is that many teachers now feel free to speak up against union groupthink.