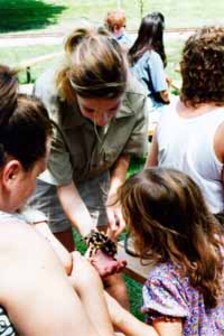 Children surround a Mexican Red-Kneed Tarantula spider at the Saginaw Children's Zoo. Animal education programs for children have been improved thanks to private grants.

Primeval howls . . . predatory growls . . . guttural screams . . . plaintive bleating. Is this the cacophony of sign-waving special interest groups rallying outside city hall to defeat the latest privatization initiative? No, these raucous sounds of the animal kingdom are actually a sign that privatization can do more than save money and improve services. In the case of the Saginaw Children's Zoo, privatization has saved the animals as well.

A 70-Year Tradition in Jeopardy

Originally intended to be one of Saginaw's star attractions when the zoo was built in 1929, the city-owned and operated amenity had become a perennial low-priority slice of a cash-strapped municipal budget by the 1990s. Over the years, this contributed to a neglect of the zoo and its animals, which in turn affected the quality of the exhibits, which naturally depressed attendance and admission receipts, which ultimately resulted in a greater demand for more subsidies to say afloat. The 1995-1996 appropriation for the zoo was $231,651.

This North-American Bobcat is among the newest of more than 100 animals at the recently privatized Saginaw Children's Zoo.

As early as 1989, the writing was on the wall. The Saginaw Valley Zoological Society, a private, nonprofit association, formed a zoo support group that year. The group believed that the zoo needed either massive subsidies or radical changes in management and operations to survive.

But there was little public or political support for increasing or even continuing the subsidies. At the same time, city officials were reluctant to cut the zoo's subsidy umbilical cord even though its popularity seemed to be waning. The Society hired renowned zoo consultant Earl Wells to propose options to save the zoo. Ultimately, the Society recommended saving the zoo by ending the subsidies and transferring ownership and management of the zoo from the city to the private sector. By 1996, Saginaw finalized its decision to privatize the zoo, counting on the Society's promise to assist the zoo's transition to a self-supporting attraction.

At the top of the Society's priority list was replacing city management with someone who could effectively market the zoo's attractions, raise support for the zoo, and help it realize its potential for education and entertainment of locals and tourists. In September 1996 Wells recruited Andrew Forester to be zoo director.

It was a good move. Forester, equipped with an advertising and marketing degree from the University of California at Fresno, focused his energies on the business and promotional end of the zoo's rescue. For guidance on the animals' needs and other questions unique to zoos, Forester relied heavily on Wells and surrounding, accredited zoos. The new director's previous employer, the Chaffee Zoological Gardens in Fresno, California, also provided advice.

Freed from the bureaucracy and political constraints of being run by the city, privatization put the zoo on a path to self-sufficient vitality. Zoo subsidies are almost phased out, income and budgets are increasing, attendance is up, new construction is booming, educational programs are growing, amenities are being added, and animal populations and health are at unprecedented levels.

From Budget Drain to Financial Freedom

The zoo had been a drain to the city budget for two decades. The zoo's 1996 conversion to independent, nonprofit status included a five-year phase-out of city subsidies. For the zoo to survive, it would have to attract enough visitor and philanthropic support to pay its employees, cover operational expenses, and underwrite capital improvements. The subsidy schedule provided $150,000 in 1996 and then $25,000 less each year until the final subsidy of $50,000 in April 2000.

The zoo's budget has grown steadily since privatization. In the 1995-1996 fiscal year, its last year as a government entity, the operating budget was $231,651. Subsequent budgets are as follows:

How has the zoo increased its budgets at the same time its subsidies were ending? Forester put together a combination of private, voluntary fundraising, more efficient concession and gift store sales, and greater attendance to survive the weaning from the public purse.

Forester and the zoo's Board of Directors have raised for the zoo nearly $2 million in private, charitable contributions since 1996. "Working separate from the municipality has helped our fundraising tremendously," he said, "because people are reluctant to give if they perceive they're already forced to support the zoo through taxes."

"Going private forced us to put together a bold plan to save the zoo by improving it, and that excited our supporters and gave them a strong reason to increase their support," he added.

This attendance combined with what the zoo expects visitors to spend inside the park on gifts, rides, and concessions would generate more than 99% of its 1999 budget. And it's all paid for by people who either patronize the zoo or give to it voluntarily. Forester does not have to bear criticism from taxpayers who complain that they have no interest in the zoo but are forced to support it anyway.

What's New at the Zoo?

Anyone who has visited the zoo recently has seen spruced up exhibits and construction crews building even more improvements.

After privatization, a massive cleanup of the zoo took 18 months. Gone is the old "fairy tale" theme that comprised 90% of the zoo, and in its place are more than $1.2 million in improvements including modern exhibits that educate children and adults about the animals, their habitats, and conservation.

In addition to new restrooms, a second concession stand, and a new 2,500 square-foot gift shop all funded by a $500,000 gift from the Wickes Foundation, the zoo added one feature found in only three other places in the U. S. The Tri-City Carvers and other volunteers contributed more than 40,000 hours over 18 months to build and donate a hand-carved, $750,000 wooden carousel featuring 20 traditional horses and less traditional beasts befitting a zoo.

A transfer from the city increased the zoo's land area by nearly 50% to 12.5 acres to accommodate all the new and planned improvements. And perhaps most importantly, the animal population of the zoo increased from 60 in 1996 to 110 in 1998. New animals include bobcats, bald eagles, and alligators. The growing number of visitors to the privatized zoo enjoy more attractions and amenities, more space, and more animals.

Improvements slated for 1999 include a children's "fossil find," White-throated Capuchin monkeys and Coatimundie (racoon-like South American animal) exhibits, and a continued butterfly house that places youngsters in a special habitat room together with the winged creatures. Part of the $25,000 spring marketing campaign will promote the zoo as a regional attraction, rather than one targeted only to Saginaw residents.

Forester hopes to earn American Association of Zoos and Aquarium accreditation for Saginaw in the future. Out of 80 zoos in Michigan, only the four in Detroit, Grand Rapids, Lansing, and Battle Creek are accredited. Battle Creek's Binder Park Zoo is also private.

Some privatization critics theorize that transferring duties from government to the private sector hurts employees. This assertion is often made to whip up public employee resentment in an attempt to derail privatization initiatives. In the case of the Saginaw Children's Zoo, city employees themselves were some of the biggest beneficiaries.

Workers praise the zoo's new private management and contrast it with the old way of doing things. "The difference [privatization made] is like night and day," said one worker who has been with the zoo for years before and since privatization. "Now everyone really wants to do a good job because they can take pride in the zoo," she said to a zoo visitor in June 1998.

No zoo employees were unionized either before or after privatization, but the labor union that represents other city employees opposed the zoo's move to the private sector. As an independent entity, the privatized zoo is no longer forced to use union members for repairs. Zoo managers are still free to hire union members for such jobs if their costs and quality are competitive with nonunion workers.

Talk to the Animals

If the animals could talk, they might have the most to say about privatization. After privatization, there are 80% more of them at the zoo, their medical care is better, and they eat healthier meals.

The higher animal population is a big reason more people now visit the zoo, but in some cases the zoo goes to the people. Animals now hit the road in a special van that takes them to school classrooms. The program is funded by part of a $246,000 grant from the Herbert H. and Grace A. Dow Foundation.

Private management has improved the animals' care, which is central to the zoo's overall health. The infusion of private funds has made possible a new quarantine center to control the spread of any diseases, and a new and sterile meal preparation unit that allows the zoo to preserve animal food for up to a month instead of just 2-3 days with the old equipment.

A zoo worker remembered the days when the city ran the zoo. "Before privatization, we were just basically trying to keep the animals alive. Now we can really care for them," she said.

Privatization is no panacea, but it was essential to the rescue of the Saginaw Children's Zoo. Under private ownership and management, the zoo has strengthened its financial position, educated and provided recreation to tens of thousands more citizens, created more and better jobs, and improved the health and care of nearly twice the number of animals.

A pessimist once quipped that no good deed goes unpunished. Officials who exercise good stewardship of the public purse by privatizing may feel their efforts to stretch budgets and improve services are appreciated by no one. They should be encouraged by the Saginaw Children's Zoo success story, which proves that privatization done right can relieve financial stress, help employees, and - best of all - save services that the public values the most.

The author, Joseph Lehman, is director of communications for the Mackinac Center for Public Policy and editor of Michigan Privatization Report.