Font size:
... 1 in 3 cigarettes consumed in Michigan are smuggled.

In 2008, the Mackinac Center estimated just how much tax evasion was going on in the state.

With the help of Todd Nesbit at The Ohio State University, we developed a model that looked at how much people smoked (reported in a survey by the Centers for Disease Control and Prevention) and a state’s legal retail cigarette sales.

The model estimated that in 2011, 29.3 percent of all cigarettes consumed in Michigan were bought in ways that evaded the state’s cigarette taxes.

In other words, nearly one in three cigarettes consumed in Michigan are smuggled.

This means that people might grab a couple of cartons when they’re out of town in the comparatively lower tax Indiana. This is known as casual smuggling and is estimated to account for 15.09 percent of all cigarettes smoked by Michigan residents.

It also means there is a large incentive to get more organized with smuggling. Running a truck down I-75 to Kentucky, where cigarette taxes are only 60 cents a pack, and shipping it back gives a $1.40 per pack advantage on the tax difference alone. These long haul shipments are known as “commercial smuggling” and represent some 16.28  percent of cigarettes smoked by Michigan residents.

Michigan’s proximity to high-tax Canada also makes it a source for out-bound smuggling. The model estimated that 3.6 percent of cigarettes sold in Michigan were transported to Canada.

State treasury officials are definitely concerned about making sure the state gets the revenue required by the tax. The bigger problem is a real human cost to these taxes. 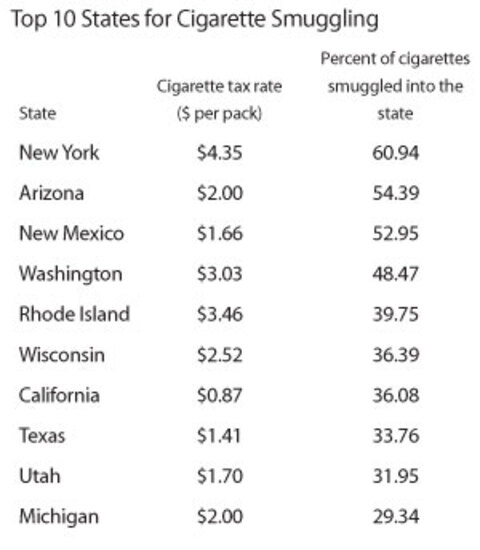 Because of the lucrative market for tax avoidance, there have been a number of instances of crime and corruption. Trucks have been hijacked in Michigan with the drivers assaulted and tied up. One perpetrator smashed a truck through a brick wall in order to steal cigarettes. Last year, a Maryland police officer was sentenced for running cover in his police cruiser for cigarette smugglers.

The market also attracts counterfeit cigarettes, not likely subject to safety and quality concerns that legitimate producers face. In a 2008 study of cigarettes smuggled from China, researchers found the products contained rotten tobacco and adulterations that could increase the already harmful effects of cigarette-smoking.

These impacts are interesting not because of the harm, but because these crimes occur solely due to state tobacco tax policies. Tobacco products have a large market and competitive retailers which would normally nullify opportunities for illicit trade. But a large difference in the costs imposed by state governments in such an easily concealable product makes it a magnet for people with nefarious intent.

Unless Michigan brings its cigarette taxes in line with its comparatively lower neighbors and national averages, it can continue to expect such high levels of cigarette smuggling.

James Hohman is assistant director of fiscal policy at the Mackinac Center.