How Do You Solve A Problem Like A Dues Skim?

Will the dues skim ever end?  According to Mackinac Center Legal Foundation Director Patrick Wright, it should end on Feb. 28.

Whether that actually occurs may depend on how the Department of Community Health and the Michigan Attorney General’s Office interpret a June 2012 preliminary injunction entered by Federal District Court Nancy Edmunds that has allowed the skim to continue.

Judge Edmunds enjoined various state officials from enforcing 2012 PA 76, which clarified that home help workers were not public employees and therefore could not be forced to pay dues to a public employees’ union like Service Employees International Union Healthcare. 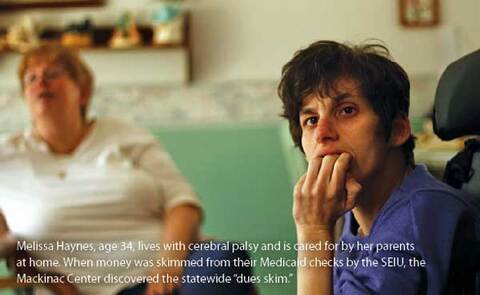 On April 9, 2012, the day before that law passed, the SEIU extended its so-called collective bargaining agreement with the Michigan Quality Community Care Council, an entity concocted by the Granholm Administration and the SEIU in order to create an “employer” for home help workers to organize against. The MQCCC-SEIU agreement was extended until Feb. 28, 2013.

The lawsuit was not the only way that the SEIU challenged 2012 PA 76. It also financed Proposal 12-04, which would have amended Michigan’s constitution to allow the dues skim. Michigan’s voters rejected this proposal 56 percent to 44 percent.

One of the proposed amendment’s provisions would have created a new “employer” that would have had its board members drawn almost entirely from the SEIU-friendly MQCCC board. Just before the election, Governor Snyder changed the composition of the MQCCC board to foil this plot.

One of the first actions this new MQCCC board took was to inform the SEIU that there would be no further collective bargaining agreement extensions. Then the board voted to end the MQCCC’s existence as of March.

Judge Edmunds’ order required the state to withhold dues “pursuant to the CBA.” According to Wright, given that there is no collective bargaining agreement in place after  Feb. 28, that should mean the state no longer is required to facilitate the dues skim that has allowed the SEIU to skim $34 million from a program meant to help some of Michigan’s neediest citizens.

The Mackinac Center Legal Foundation has sought to return a portion of that $34 million back to home help workers through its representation of Patricia Haynes and Steven Glossop. Patricia and her husband Robert tend for their two adult children who have cerebral palsy and Steven has spent the last four years providing care for his mother who suffered complications from a stroke. The case is currently before the Michigan Employment Relations Commission and a decision could issue at any time.