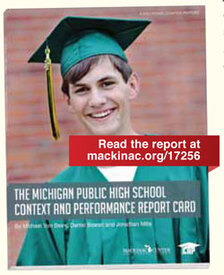 The Mackinac Center has made a name for itself by providing transparency to public schools, particularly in regards to fiscal operations. Recently, the Center took a step toward tackling socioeconomic factors in public education. It’s efforts produced “The Michigan Public High School Context and Performance Report Card.” This report card is the first-of-its-kind to account for differing poverty levels among high schools that impact their performance on standardized tests.

Most people agree that socioeconomic factors affect how well students perform on standardized test, but no one had been willing to actually account for this fact when measuring school performance — until now.

The Mackinac Center’s new “CAP” report card uses the number of students in a high school who qualify for a free or reduced-price lunch based on their household income as proxy for a school’s poverty level. With regression analysis, we could produce an average test score prediction for each high school given its poverty level. Schools were then compared based on how far their actual scores were above or below these predictions and assigned a corresponding “CAP Score.” Schools were also assigned a letter grade based on this CAP Score to create an easily understood metric for the public to use when comparing high schools.

Several findings from the report card may surprise people. For instance, suburban schools are often considered to be the best types of schools, but this isn’t always the case when taking into account socioeconomic status. The average CAP Score for high schools in towns and rural areas was higher than the average for suburban high schools. High schools located in cities had the lowest average CAP Scores among these groups, but the 69 high schools located in midsize and small cities averaged better CAP Scores than their suburban counterparts.

The reception of the high school report card has been nothing less than stellar. Many school officials have praised it publicly. For instance, John Helmholdt, a spokesperson for Grand Rapids Public Schools, told The Grand Rapids Press, “In the era of federally prescribed, one-size-fits-all standards and measurements, the Mackinac Center’s first of its kind report is very much welcomed and appreciated.” The district also cites the report card on its home page.

A number of other district superintendents told Michael Van Beek, the Center’s director of education policy and one of the authors of the study, that the report card was superior to any of the assessments produced by the Michigan Department of Education.

The CAP report card was also a big hit with the media. Reporters may have enjoyed some of its surprising findings or perhaps appreciated an easy-to-understand methodology. Either way, the report card was cited in more than 20 different news stories in papers all across the state, from Holland to the Thumb.

Some school districts are really trying to cash in on the high marks their high schools got on the Center’s new report card. Both the North Huron and Grand Rapids school districts have discussed putting up billboards touting the study’s findings in an attempt to attract more students. Both of these districts, although vastly different (one’s small and rural and the other large and urban), are finally getting positive recognition for the performance of their high schools.

These responses from the media and school officials are encouraging. They might be signaling that the public is hungry (or at least the media thinks it is) for good comparative information about school performance, and that schools, which once enjoyed strict monopolistic privilege over providing educational services to parents based on ZIP codes, are more fully embracing the need to compete with other schools to provide parents with the very best they can offer.

The success of this high school report card will spin off further forthcoming projects. We plan to release a similar report card that analyzes elementary and middle school performance soon, and plan to update both of these studies annually so parents and taxpayers will have the latest information about school performance available to them.

We also plan to actively use the results of the report card to help improve the performance of all of Michigan’s public schools. Since we controlled for socioeconomic factors, the schools with high marks on our report card must be doing a lot of things right, and we plan to find out what those things are. We’ll visit some of these schools and produce mini-documentaries of their success stories. We’ll then share these stories with other schools, hoping that they will be able to replicate some of the highest-performing practices. If they can, parents and students should find better schools available to them.

Measuring school performance is not easy, but the Michigan High School Context and Performance Report Card is one of the best tools available to compare schools to one another. For the Mackinac Center, this is just another free public service we’re happy to provide to Michigan parents, students and taxpayers.