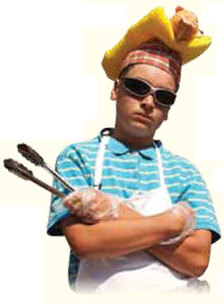 It’s unpredictable what sets off a firestorm. I am referring, of course, to the case of 13-year-old Nathan Duszynski, who wanted to help his struggling family by running a hot dog cart in downtown Holland.  Nathan’s fledgling business was shut down within minutes of opening by a city zoning officer.  Patrick Wright, director of the Mackinac Center Legal Foundation, spotted the story online from the Holland Sentinel. “Hurry before your old station beats you to it,” he alerted me.

Nathan on the Mackinac Center: “You were the  most involved.”

It was indeed a powerful story, and I figured that at the very least, we could earn Nathan some more local news.

I thought I would have been the sixth or seventh to call.  I was the first.  The media was missing this or simply not recognizing how outrageous it truly was. Nathan’s mother, Lynette Johnson, answered the phone and began reiterating his story, with an additional bombshell. She and Nathan’s stepfather were hoping Nathan’s business could turn into a family operation so that they could get off government assistance. It was an ideal setup for disabled parents having a difficult time keeping normal working hours.

I found Nathan at his hot dog cart with a “for sale” sign. He greeted me and then went fast to work. A potential customer arrived, interested in buying Nathan’s cart. It was an odd scene. Nathan acted every bit the seasoned sales professional with a customer nearly triple his age. Moments into his sales pitch, Nathan extended his hand,

“I’m Nathan by the way,” he said. The man asked if I was his mother and was taken aback when I said I was not.

“You have your own business, man? Wow, that’s good, real good. Keep up the good work,” he said. He assured Nathan he’d be back.

Nathan then had a few moments to answer some questions on camera. He described how he got the entrepreneurial bug when he sold hot dogs during Holland’s Tulip Time festival. He told me how he had saved money and shopped for a cart. He told me how he made his first business deal with the owner of a local sporting goods store. Owner Ken Vos offered him a visible location in his parking lot for a percentage of the sales. In addition, Vos would pay commissions if Nathan could sell or rent his motorized bicycles.

Nate’s mother and stepfather arrived and described how they were helping Nathan with the things a minor can’t necessarily do. They created a family business so Nathan could have the freedom to work without child labor restrictions. They helped him research and acquire the necessary permits. The family managed to pull together enough cash for the initial investment of several thousand dollars.

What happened between then and Nathan’s first day of business is murky, but it is clear there was a miscommunication. The city failed to inform Nathan that his cart would be in a C-3 Commercial Zone, prohibited from selling food unless it was part of an established brick-and-mortar restaurant within that zone. Nathan’s cart was within feet of the edge of that zone, which made the closing appear even more arbitrary.

All of this seemed at odds with the city of Holland, which was the birthplace of many successful businesses and had the support of well-known and successful entrepreneurs. Its downtown has more retail shops than nearby communities double its size. City administrators and the mayor made themselves available to explain the zoning policy. They explained the ordinance was created to protect restaurants and businesses that helped maintain the success of the downtown area by paying additional assessments for public parking and heated sidewalks. It would not be fair to allow a business that did not have to pay the high property tax in that district or follow its strict zoning code.

Although not an uncommon line of reasoning, this would be a tough sell once it reached a larger audience. Holland is no different than thousands of other cities in the use of restrictive, anti-competitive ordinances. What made this one different was that now “competition” had a face – an enterprising teen wanting to save money for college, a car and his disabled parents.

We produced a four-minute video telling Nathan’s story. We posted it to our website on a Thursday in late July. By noon on Friday, the video received more than 30,000 views, nearly as much as our top-viewed video, which has been posted for several years. This did not happen by dumb luck. Our social media mavens, Jarrett Skorup and Lindsey Dodge, immediately went to work informing big Internet guns, State Policy Network analysts, Drudge, Reason, Hot Air and The Detroit News. That led to coverage from Fox, CNN and the Huffington Post. Within several days, views were approaching 100,000.  As one media report put it, “It’s kind of turned into an octopus. It’s no longer just about a hot dog cart.

It is hard to say what makes a video “viral.” Viral is a relative term. Some videos get views in the millions. Most are lucky to get several thousand. I would like to think it was my investigative prowess and unparalleled production skills but I know better. There are videos that can take far more effort and get no traction. Sure there was an element of luck and timing. It is an election year. Free enterprise is getting more attention thanks to people like American Enterprise Institute’s Arthur Brooks and his new book, “The Road to Freedom.” There was also that comment by President Obama that so offended many Americans, “If you got a business, you didn’t build that,” suggesting business succeeds only with the help of government regulation and infrastructure. There was, however, more to it than timing.

It took the foresight of a free-market think tank with the resources to delve into the issue rather than just comment on it. Traditional media did not recognize this story for its potential. Because the Mackinac Center realized the story’s potential and because it has the resources now to act like any other news organization, we captured the story when there were pictures. Nathan sold his cart within hours and after that there were no pictures. Without pictures, there can be no video, or at least not one that would interest outlets with huge reach.

Several weeks after the firestorm, the city of Holland found a loophole to allow Nathan to operate his cart on the sidewalk near his original location. The Mackinac Center believes ordinances such as the one restricting Nathan hinder young entrepreneurs entering the labor market. Holland Mayor Kurt Dykstra does not disagree. He wanted Nathan to be able to make money before the summer ended, but to change an ordinance could take months. He also states that the city is now open to the larger question of allowing food truck venders to operate in the downtown area.

Moving city hall can feel like moving a mountain, but it can be done with a tiny Canon camera and by an organization committed to using its influence on behalf of those who have none.