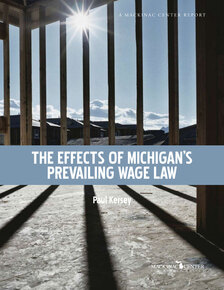 After a long and contentious public hearing, the Bay City Commission voted to repeal the city’s prevailing wage ordinance on Feb. 6.
The vote came after three hours of public comment and may mark a tipping point for labor issues in the state.

There are 15 cities and counties in Michigan with their own prevailing wage ordinances that either explicitly or practically require the payment of union wages on all local-government funded construction. Bay City is the first community in the state that we are aware of to repeal its ordinance.

Mackinac Center research shows that prevailing wage ordinances increase the cost of construction by at least ten percent without any noticeable improvement in quality or on-time completion. (The Effects of Michigan’s Prevailing Wage Law by Labor Policy Director Paul Kersey can be found at https://www.mackinac.org/8907.) The prevailing wage law requires the payment of premium wages in an industry that does not suffer from low compensation. Wages in the construction industry, which is nearly 80 percent non-union, are well above average compared to other Michigan industries.  Kersey estimates that state and local prevailing wage laws cost the state at least $200 million annually.

The Mackinac Center has been working for years to call attention to the cost of prevailing wage laws, and Kersey himself appeared at an earlier hearing of the Bay City Commission to remind commissioners and the audience that average wages in the construction industry in Bay City were nearly $6.00 an hour higher than for Bay City’s workforce as a whole. “If there’s an industry in Michigan that needs a government-mandated wage boost, construction is not it. Bay City taxpayers are paying extra on construction to boost wages for workers who are already pretty well off,” said Kersey.

Momentum to reform labor laws is building. Last year the Legislature prohibited the use of Project Labor Agreements that prevent non-union companies from bidding on government construction projects. This law should lower the cost of government construction around the state by opening up projects to more competition. And legislation to repeal the state’s prevailing wage law is expected to be introduced in Lansing fairly soon.

“With Indiana passing a right-to-work law, the pressure will be on in Michigan to show that we are no longer beholden to union bosses,” says Kersey. “If policymakers are unwilling to pass right-to-work legislation, they should at least be willing to tackle the prevailing wage. Bay City has shown them the way, and the savings for taxpayers would be substantial.”