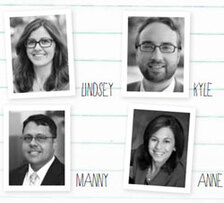 Lindsey Dodge: In her six months at the Mackinac Center, Assistant Editor Lindsey Dodge has infused the Communications Department with enterprise, cheerfulness and a New York City sense of style. To her colleagues’ amazement, she’s maintained her enthusiasm even when fact-checking endless pages of public pension-related spreadsheets. (So much for hazing.)

Before joining the Mackinac Center, Dodge lit up magazine and digital publishing at International Creative Management in New York, where she worked with such writers as Pete Hamill, Jay McInerney and Rick Bragg. She was also the first female editor-in-chief of The Michigan Review, the contrarian campus newspaper at the University of Michigan. Under her leadership, the newspaper was awarded Best New Media by the Collegiate Network in 2008.

In addition to her editing work, Dodge is active in advancing the Center’s message through social media. “I love interacting with our supporters and online fans,” she says. “It’s an essential component of policy analysis: translating our findings into an engaging conversation with those who share our love of liberty.”

Manny Lopez: Manny Lopez is joining the Mackinac Center as managing editor of Michigan Capitol Confidential after eight years at The Detroit News and nearly 20 years of journalism experience in Michigan and the Midwest. The opinion page editor of The Detroit News since 2010, in his first year Lopez won the Society of American Business Editors and Writers award for excellence for his weekly “Think” column.

His primary beat was the auto industry, breaking national news stories that took readers behind the scenes of the Motor City’s hallmark during its most tumultuous era.

Lopez received his master’s degree in economics from the University of Detroit-Mercy and has been a longtime admirer of the Mackinac Center’s free-market solutions to public policy issues. “The mission of the Mackinac Center is the driving force behind my interest in becoming part of the team. When it comes to reporting and writing about free-market principles and liberty, Michigan Capitol Confidential is the best place in the state for that.”

A Michigan native, Kyle was delighted to return to his home state. As he puts it, “Working at Mackinac gives me the chance to have a positive impact on the political and economic climate that makes many young Michiganders have to choose between a successful career and staying near home, and I’m thrilled to have a hand in changing that.”

Kyle’s work has contributed to free-market successes such as lifting the cap on charter schools, but his favorite thing about the Mackinac Center is his colleagues: “Every day I roll out of bed and look forward to work because it means another day of interacting with intelligent, funny people who value liberty as much as I do. That’s a great feeling.”

Anne Schieber: Anne Schieber brings 30 years of on-camera reporting, anchoring and producing experience to her new role of senior investigative analyst at the Mackinac Center, with 20 years in Michigan. Specializing in stories of poor public policy, economics, labor and corporate finance, Anne was selected Journalist of the Year by the U.S. Small Business Administration, as well as the West Michigan Public Relations Society for business reporting.

One day after joining the Center, Anne headed to Indianapolis to cover the legislative battle over a bill that would make Indiana the first right-to-work state in the industrial belt. She produced a series of videos covering the legislative debate, walkouts by Democratic legislators and union protests surrounding the Capitol. In the end, the bill passed and was signed into law.

Working with the Mackinac Center, Anne has observed how our policy staffers sniff out powerful stories that too often are overlooked by mainstream media. “Newsrooms are cutting back on resources. They no longer conduct the investigations they had done in the past. The Mackinac Center is filling in the void, and I’m excited to be part of it.”