Putting the Passion in Compassion 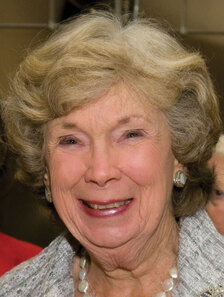 Ethelmae C. Humphreys’ home and family business were not physically damaged in the May 22 tornado that killed 160 people and devastated the city of Joplin, Mo. But that doesn’t mean her interests were untouched.

Several of the employees of TAMKO Building Products Inc., where Humphreys is chairman of the board, lost their homes to the storm. The local high school was destroyed and other local businesses were leveled.

“This is the worst I’ve ever seen,” Humphreys said of the damage, including the years she spent growing up in tornado country in Kansas.

But the philanthropy that TAMKO and other businesses and individuals have shown in Joplin has boosted the rebuilding efforts there. Within days, TAMKO made a generous gift to support relief initiatives.

“That turned out to be a lead gift, and many others joined in,” Humphreys said.

Humphreys is a longtime supporter of the Mackinac Center and of the principles of freedom and free enterprise. Her parents, E.L. and Mary Ethel Craig, founded TAMKO in a streetcar barn in Joplin in 1944. Today, the corporation is among the nation’s leading independent manufacturers of roofing, decking composite materials and other building products.

Humphreys led operations at the company for much of the 1950s, joined by her husband, Jay, as company president in 1960. After his death in 1993, their son, David, became president and CEO.

Free-market literature is one reason that the Humphreys became active in the freedom movement, according to Ethelmae.

“We started reading ‘The Freeman’ (a periodical of the Foundation for Economic Education) and became aware of how important freedom was to us. That’s how we became turned on to the freedom philosophy.”

Since then, Humphreys has served on the boards of the Cato Institute and FEE, where she met Lawrence W. Reed, then-president of the Mackinac Center and now a member of its board of scholars. Through Reed she learned more about the Center’s work.

“Every movement for social change has heroes who sacrifice to improve the lives of people they will never meet. Ethelmae’s generosity to the freedom movement and her labors in it inspire me to want to give more and work harder,” Lehman said.