On the heels of a watershed victory against the illegal unionization of Michigan’s home day care workers (see Impact, Summer 2011), The Mackinac Center Legal Foundation has scored two more victories against the misappropriation of government resources for private purposes. The result is more than just fidelity to the letter of the law: It is a check on the unfair advantages that monopoly labor unions have gained over Michigan’s residents — and a better chance for Michiganders to pursue their destinies as free people. 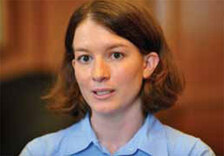 “I felt betrayed. The Board was supposed to defend my interests as a student, and instead it abandoned them to the GEO.”

Just imagine you’re Melinda Day, a bright and ambitious young graduate student at the University of Michigan. Day is pursuing a doctorate from U-M’s Molecular, Cellular and Developmental Biology Department, serving as a research assistant at U-M’s Life Science Institute. For Day, the assistantship means hard work in a daily race with other American research universities, any one of which might publish results that preempt her team’s. Her work is also essential to her dream of receiving her doctorate and entering a field of cutting-edge science.

Last April, that dream was threatened — not by a research obstacle; not by a competing lab; but rather by a labor union. The Graduate Employees Organization, an affiliate of the American Federation of Teachers, announced that it sought to organize U-M’s graduate research assistants as public employees.

Most Michiganders don’t know that graduate students at the state’s universities can be unionized, but Day was all too aware. Earlier, as a graduate teaching assistant, she had refused to join the GEO, which “represents” teaching assistants in collective bargaining negotiations with U-M. Despite her refusal, she was legally compelled to pay the GEO “agency fees” that were virtually indistinguishable from union dues.

Worse, Day remembered the work rules and work-hour restrictions the GEO had bargained for teaching assistants, and she knew the union contemplated similar restrictions for graduate research assistants. As she later told us: “It would hinder our ability to do science. Cells don’t know that work hours are 9 to 5. Cells don’t know when it’s the weekend. I recently completed an experiment that involved taking samples every eight hours. I wouldn’t have been able to do that under the strict work-hour regulations the GEO wants.”

Fundamentally, with unionization, Day knew that she and other U-M researchers could suffer a crippling disadvantage in competing with other universities in completing and publishing research. Nor could the union bargain with the university for better wages, since the money for her research came from a federal grant. Unionization, she concluded, was a Pandora’s Box.

Then the other shoe dropped. In May, even as Day and other graduate students began to organize against the proposed unionization, the U-M Board of Regents voted 6-2, in a party-line vote, to support the GEO’s proposal to unionize U-M’s graduate research assistants. “I felt betrayed,” Day said later. “The Board was supposed to defend my interests as a student, and instead it abandoned them to the GEO.” Amazingly, the board had made its decision despite the impassioned objections of University President Mary Sue Coleman, who told the regents before their vote: “I do not see research assistants as our employees, but as our students. … When I was a graduate student, I did not see myself as working for the university, and I did not see my faculty mentor as my employer. Far from it.”

But Coleman’s plea had gone unheeded. At this point, Day told us, “I felt alone.”

Patrick Wright, director of the Mackinac Center Legal Foundation, had heard about the case. He knew that for the GEO to unionize U-M’s graduate research assistants, the union would need the approval of the Michigan Employment Relations Commission, a state agency that oversees elections for the state’s public employee unions. His research revealed that in 1981 MERC had ruled that graduate research assistants at state universities were not public employees. This ruling had the full force of law. In fact, MERC had reached its decision only after 19 days of hearings, thousands of pages of exhibits and hundreds of pages of legal briefs. And Wright also discovered that MERC had rendered its 1981 decision in a very specific case: a case involving the GEO, the University of Michigan — and the university’s graduate research students.

In other words, the GEO, without bothering to lobby the Michigan Legislature for a change in state labor law, was hoping that MERC — the very same state agency that had rejected the GEO’s earlier petition as improper — would ignore its earlier ruling involving the very same union, the very same university and the very same classification of students.

Yet the GEO appeared likely to get away with it. It was already June, and MERC hadn’t rejected the GEO’s petition. Nor was MERC’s recent track record encouraging for Day and students like her: MERC was the same state agency that had signed off on the illegal unionization of Michigan’s home-based day care providers, a case Wright had had to argue for more than a year before the state capitulated and stopped collecting illegal “union dues” from federal day care subsidies.

So Wright called Day in June and offered to represent her. Grateful — and determined — she accepted. As she said at the time: “I can’t let this go by without trying to stand up for what is right, and in this case, we have a situation where liberty is being lost.”

Wright moved quickly. In July, acting on Day’s behalf, he filed a motion to intervene at MERC in the deliberations over the GEO’s petition. Legally, he argued, this case was already settled, unless MERC wanted to reconsider its 1981 decision. If the case were revisited, he noted, the GEO would have to provide decisive evidence that the facts of the case had changed; yet, as he showed, the facts were essentially the same. Wright’s detailed, methodical 20-page brief inexorably painted MERC into a corner: The commission would have to willfully ignore its own binding precedent, or it would have to engage in a long, costly process with no guarantee of a different result.

Nevertheless, the outcome was uncertain. The GEO immediately responded with a vituperative legal filing that argued Day lacked legal grounds for appearing before MERC — an interesting charge, since MERC had earlier defended its actions in the home-based day care case by saying it would have readily listened to testimony from any providers who had objected. And the GEO remained confident in August, just days before MERC’s eventual decision, posting on its website, “[W]e need the Michigan Employment Relations Commission to approve of the terms and order the election; we expect that both of those things will happen at MERC’s regular meeting this coming Monday. Look out for an update Monday afternoon!”

Wright showed up for the MERC meeting that Monday, Aug. 8, and bad news came quickly: MERC rejected Day’s motion to intervene. This hadn’t been completely unexpected — Wright’s day care union case had started with a defeat — but it signaled that Wright and Day were in for a long haul. The GEO appeared poised to receive MERC’s approval, and Wright knew he would have to appeal to the courts while the GEO marched ahead.

And then suddenly, it didn’t happen. Wright listened intently as the commissioners, in a deeply gratifying reversal of fortune, unanimously dismissed the GEO’s election petition, citing MERC’s 1981 ruling and reiterating that ruling’s holding that graduate research assistants were not public employees. The commission, in other words, had accepted the Center’s arguments and done the right thing. Day would not be forced into a union that could skim “fees” from her stipend and jeopardize her future.

Wright immediately phoned Day, making a call to his client that every lawyer dreams of. She was elated and relieved. “You are all lifesavers,” Day later told Wright and the Center’s communications staff. “I felt like I was fighting this on my own and being overpowered. Then you stepped in.”

Wright knows the union may not give up. He notes that MERC offered to help the GEO hold nonbinding union elections — a questionable offer of public resources that might allow the GEO to try to parlay a positive vote into a compulsory union. And the GEO has an incentive to press on: This unionization would have made 2,100 students into public employees and led to over $1,000,000 in annual dues going to union coffers.

Yet there is no doubt that MERC’s ruling is a crushing defeat for the union in a labor venue where it had its best chance of success. Michigan courts will be reluctant to second-guess MERC’s decision, and the Legislature seems more likely to restrict new unionizations than expand them. The GEO’s task has just become exponentially harder — as, indeed, it should. The burden of proof should remain on those who would place unionization over education and put students’ research — and dreams — at risk.