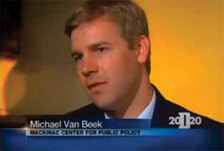 Education has long been one of the Mackinac Center’s biggest focuses and biggest successes. Two recently completed projects are significant contributions to the Center’s goals of increasing transparency and fiscal responsibility for the state’s largest expenditure — public schooling.

The first is an online database of student achievement data from Michigan’s 678 public high schools. The Center’s “Michigan Public High School Context and Performance Database” goes far beyond any other such database, gathering data from more than 20 different state and federal sources. It includes high schools’ locale, enrollment, graduation rates, ACT® test scores, Michigan Merit Exam test scores, and the percentage of students who qualify for the federal government’s National School Lunch Program. It also enables users to quickly compare high schools within a particular county, school district or locale group, or see how they stack up compared to the entire state.

The information contained in the CAP database was exactly what many parents and taxpayers were looking for as evidenced by the number of users who flocked to the Mackinac Center’s website to check it out. About 1,200 unique visitors came to the site within the first 24 hours of existence, and there were more than 11,000 queries made on the database in that time period.

By averaging standardized test scores and providing additional “contextual” information, the Center’s database provides taxpayers with a better understanding of how their public high schools are actually performing compared to most anything else available. For example, the percentage of a school’s population that qualify for a free or reduced-price lunch under the National School Lunch Program is a way of measuring the socioeconomic make-up of a high school’s student population. This variable has been shown to have an impact on a school’s standardized test scores, so the CAP database enables users to see more than just a single test score, and perhaps an opportunity to find some schools that are exceeding expectations.

Additionally, standardized test scores can vary year-to-year, since an entirely different group of students is being tested each year. Averaging these test scores over a four-year period provides a fuller picture of a high school’s performance than just a single annual snapshot.

The media also found the database useful and it was reported on across the state. Newspapers like The Bay City Times, Petoskey News-Review and Holland Sentinel all used the database to check out how their local schools were achieving, and one superintendent commented that it was a “valuable tool.” Flint’s WJRT-TV12 and Saginaw’s WEYI-TV25 also reported on the release of the CAP database in June.

Just as the CAP database helped shine a light on high school performance, the Center’s study on school finances released in May helped illuminate the fiscal disparities between districts based on the type of area in which they operate. “Revenues and Spending of Michigan’s Urban, Suburban, Town and Rural School Districts: 2004-2010,” compiles seven years worth of revenue and spending data and analyzes these in per-pupil terms for Michigan’s urban, suburban, town and rural districts.

The study uses the National Center for Education Statistics’ methodology for identifying the different locales of school districts. It takes into account local, state and federal sources of revenue for schools, so all funds received by schools are accounted for. The study also breaks down spending into 10 categories, including instruction, administration, support services, transportation and food services. Using these categories reveals some of the different spending patterns among different locale groups.

Interestingly, even though town districts spent less per pupil, they tended to devote a larger portion of their spending to instruction (63 percent), more than both the averages from city and suburban districts. City districts spend a larger share on support services like counseling, social work and psychological services. In fact, they spent almost three times on these services than rural districts did per pupil on average in 2010.

This new study garnered attention from the media. Michael Van Beek, director of education policy at the Center and author of the study, discussed these findings on WJR’s “Frank Beckmann Show.” Van Beek also appeared in a story for WXYZ-TV7 in Detroit, which devoted an entire segment to the study.

These two recent projects are valuable additions to the Mackinac Center’s growing number of school databases. The Center’s growing reputation has even penetrated the bureaucratic walls of the Michigan Department of Education, which recently referred a reporter to the Center when they asked about data on teacher salaries. The Mackinac Center is quickly becoming the go-to place for facts about Michigan’s public school system.