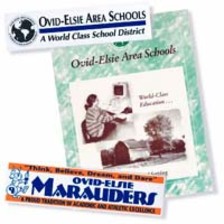 Some of the Ovid-Elsie Area Schools promotional material pictured above is distributed by local realtors. The mid-Michigan district enrolls in its five schools the children of about 2,000 households and promotes itself through an array of professional newsletters, district calendars, brochures, and annual reports. District official Kris Kirby calls improved public communication a "crucial part of [Ovid-Elsie's] strategic plan."

The schools-of-choice program, begun in 1996, allows Michigan parents options among public schools outside their home district. As a result, districts have begun advertising their programs to let parents know the benefits the schools can offer to their children.

"We actually started marketing our schools before the schools-of-choice program even began," said Mike Lindley, superintendent of New Buffalo Area Schools. "We started it many years ago due to declining enrollment in the 1980s."

However, New Buffalo's marketing efforts have increased since 1996, he said. "We put ads in the three local newspapers and a full page ad in an area magazine that reaches many tourists who visit the region," he said. "We want people to know what a great job our schools are doing."

Did the marketing effort pay off? According to Lindley, New Buffalo has attracted 52 students from other districts over the past three years. With approximately $6,000 in state education dollars coming with each student, the district has definitely benefited financially, he said.

Some districts such as Holland Public Schools and Hartland Consolidated Schools in Livingston County employ direct communication with parents instead of mass communications efforts.

In a November 1996 letter, Carmen Hannah, principal of Holland's Van Raalte Elementary School, encouraged a departing family to reconsider Van Raalte if the charter school they chose did not meet their expectations. Hannah also asked the family to complete a survey designed to identify areas where they had been dissatisfied with Van Raalte.

In a few Kalamazoo area school districts, marketing costs are now a regular part of the schools' budgets. According to the Kalamazoo Gazette, Portage public schools now spend roughly $45,000 per year on marketing, and the Kalamazoo school district spent $80,000 to hire a firm for a promotional effort prior to the 1998-99 school year.

Superintendent Mark Bielang of Paw Paw Public Schools told the Gazette, "I definitely think the marketplace has changed and forced us to look at how we connect to our customers. We have to let our customers know we provide something different than our competition."

Responding to the charge that marketing public schools is a waste of tax money, Lindley points out that his district's investment of roughly $10,000 in advertising has netted over $300,000 by attracting new students. "We need to let people know how taxpayer money is being spent, particularly critics of public education," he said.