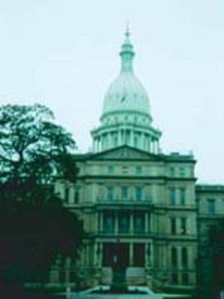 In Michigan, a new Republican House majority and strengthened Senate majority are expected to help Governor Engler lift or remove the charter school cap, now set at 150. In the 90th Legislature, 44 Representatives and 21 Senators have publicly supported a K-12 tuition tax credit.

Education continued to gain prominence as a campaign issue for state and federal political candidates in 1998, and polls confirm that education was a top concern among voters in Michigan.

Governor John Engler, re-elected over Michigan Education Association-endorsed challenger Geoffrey Fieger, has pledged in his third term to lift the cap on the number of charter schools that can be authorized by state universities. Engler has also committed to implementing a new innovation called "freedom schools."

Under the freedom schools proposal, a two-thirds majority of parents or a simple majority of teachers and administrators could vote to operate their Detroit public school independently from the Detroit Board of Education. The independent school would have the autonomy and governance of a charter school. In his unsuccessful gubernatorial campaign, Fieger opposed charter schools, freedom schools, and parental school choice initiatives such as vouchers or tuition tax credits.

Education was also central to the political debate in other states. A Colorado ballot initiative allowing parents to receive a tax credit for choosing alternatives to public education was rejected by voters. The initiative was seen as flawed by both school choice supporters and opponents, who noted that the $2,500 credit was available only to parents and would not result in any savings to the state.

"The Colorado tax credit was limited only to parents whose children fell into complicated categories of eligibility and would not have produced savings for the taxpayer," said Mackinac Center for Public Policy Director of Education Policy Matthew Brouillette.

"This proposal will apply to any taxpayer individual or business who pays tuition for any child at any Michigan public or nonpublic K-12 school, and it will produce billions of dollars in savings that can be used to increase per-pupil funding for our public schools," Brouillette said.

Brouillette added, however, that even with its flaws, the Colorado plan attracted 41 percent of the vote, which is five percentage points more than any previous school choice ballot measure has received.

Support for school choice was also strong in Ohio and Illinois, where the state affiliates of the National Education Association union endorsed successful Republican gubernatorial candidates who publicly committed themselves to enacting reforms that would expand school choice for parents in those states.

In Florida, successful gubernatorial candidate Jeb Bush campaigned on a platform of bold education reforms. Under his plan, schools would receive cash incentives to succeed, and those that showed chronic failure could have their contracts with administrators and teachers either renegotiated or terminated. Parents of students in chronically failing schools also could be given the option of receiving a voucher to send their children to a higher-performing public or private school.

Changes in the U. S. House of Representatives and new majority leadership portend little change in federal education policy. However, the chairmanship of the House Early Childhood, Youth, and Families Subcommittee has been vacated and will not be filled until late January. The subcommittee will have the responsibility of re-authorizing the Elementary and Secondary Education Act, the federal government's largest and most costly role in K-12 government schooling.