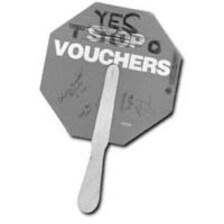 After School Choice YES! President Gary Glenn's speech on the benefits of school choice, students recruited to carry anti-school choice sign at his talk used markers to reverse a sign's meaning and autograph it before giving it to Glenn. (School Choice YES! is promoting the Universal Tuition Tax Credit, not a voucher plan.)

"This was a difficult decision for CMU, as many parents were passionate and pleased with the education their children were receiving from Sierra Leone," said Jim Goenner, director of CMU's charter schools office. "But performance and accountability are synonymous with charter schools. As professionals we must accept no less."

CMU chartered Sierra Leone in 1995, but suspended the school's charter when plans to move into a new facility did not materialize. When the school failed to provide critical financial information to CMU, the university prevented the academy from opening for the 1998 school year. "As the authorizing agency, we must hold the schools we license accountable both financially and academically," said Goenner.

Sierra Leone officials are exploring their legal options for reopening the school.

Turtle Island opened in 1997 under the authorization of Oakland University. On June 30, the university's 14-member board revoked the school's charter, saying that what Turtle Island agreed to do in its charter was inconsistent with what was happening in the school. "The curriculum and practice were different," said Angie Melhado, coordinator of urban partnerships and public school academies at Oakland University.

Melhado said that the university attempted to rectify the discrepancies, but after months of working with the school, the university decided that the best course of action was to revoke Turtle Island's charter.

"I attended almost every school board meeting, visited the school multiple times, an average of once per week, provided feedback, and involved colleagues, but we just couldn't work things out," Melhado told MER. "So, for the benefit of the children involved, the university decided to revoke Turtle Island's charter."

Critics question the accountability of charter schools, which operate free from some of the bureaucracy that often paralyzes traditional public schools.

"The charters do not have the accountability of an elected board," said Herb Moyer, former public school superintendent and current member of the Michigan State Board of Education, in a Detroit News story on charter schools.

Goenner and Melhado point out that both Central Michigan and Oakland Universities hold the schools they license very accountable.

"The failure of Sierra Leone and Turtle Island should serve to silence those critics who claim state universities are merely 'charter school mills,'" said Melhado. "We hold the schools we license accountable and have demonstrated that we are willing to stand up and be counted when a school fails to do what it said it would do."