Friday on his Fox television show, Glenn Beck described public policy changes along a spectrum from right to left, dubbing the range of current policies “the Overton Window.” He borrowed the term my colleagues and I gave to a theory of change developed by the Mackinac Center’s late vice president, Joseph Overton. When Joe died in 2003, I built a presentation around his idea, known as the Overton Window of Political Possibility, and I still use it to show how think tanks can shift public policy.

Joe shared his abstract concept with me in the mid-1990s. He observed that any collection of public policies can be arranged in order from more free to less free (or alternatively, from less government intervention to more). To avoid comparison with the left-right political spectrum, he arranged the policies from bottom (less free) to top (more free).

Glenn Beck said on his show that "politicians move the window," but that’s actually a rare and special case. In our understanding, politicians typically don’t determine what is politically acceptable as much as they react to it and validate it. Generally speaking, policy change follows political change, which itself follows social change. The most durable policy changes are undergirded by strong social movements.

Prohibition was a policy change driven by a social movement that did not prove strong enough to sustain the policy. Certain environmental policies that have proven durable are backed by strong social movements that favor those policies — or at least the idea they represent.

When social and political forces change, the window of political possibility shifts up or down the spectrum, and it can grow narrower or wider as well. The window presents a menu of policy choices to politicians: Relatively safe choices are inside the window, and relatively risky or radical choices are outside the window.

Here is a graphic that shows how the Overton Window operates in education policy, for example. 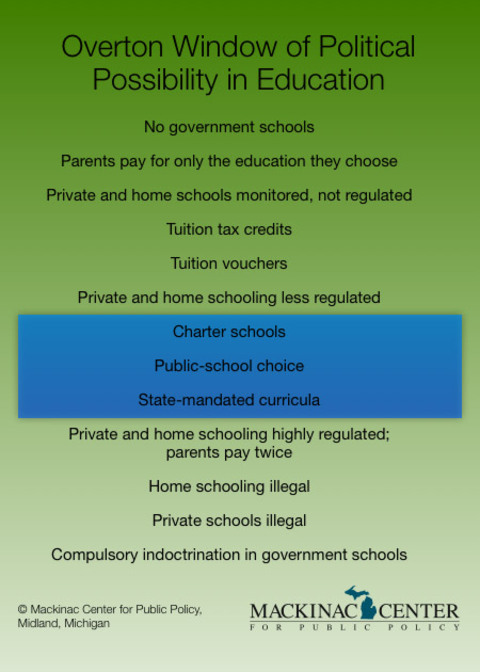 Politicians who choose policies outside the window before it has shifted are one of two kinds — true leaders who have the rare ability to shift the window by themselves, and politicians who invite very tough re-election campaigns because they are perceived as out of touch. This explains why key senators and representatives are reluctant to support a massive federal health care bill perceived as unpopular among the people. They know a vote outside the window will subject them to the political furies.

The Overton Window doesn’t describe everything, but it describes one big thing: Politicians will rarely feel free to put in place whatever policy they choose at any time they choose; rather, they will calculate that their range of choices is shaped by the ideas that drive social movements and societal sensibilities.

I’ve presented the concept of the Overton Window dozens of times to hundreds of people, mainly think tank professionals. It’s proven very useful in explaining the means by which think tanks influence policy by developing and promoting ideas. Many people in my audiences went on to blog about it. Glenn Beck’s brief treatment has now exposed the concept to a much larger audience.