A Summary of the Loss of Available MEGA Data

As noted in the preceding sections, nearly every major document furnishing important information about the MEGA program has become less detailed and less useful. Graphic 7 helps indicate what information is no longer available.

Graphic 7: Sources of MEGA Data, Past and Present 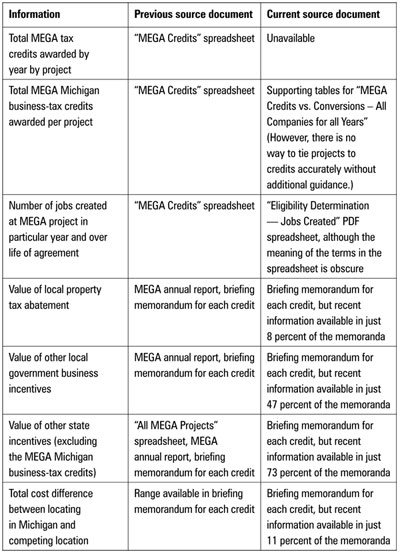 Note that in several instances, the "current source" column indicates a particular piece of information is available only a certain percentage of the time (the percentage is calculated for MEGA briefing memoranda produced from July 2008 to December 2008). The percentages range from 8 percent, for local property tax abatements, to 73 percent, for other state business incentives other than MEGA's Michigan business-tax credits. All of these figures used to be 100 percent.

As the graphic makes readily apparent, much of the basic, necessary information about MEGA is now unavailable or no longer readily accessible.