Although MEGA provides Michigan business-tax credits, the MEDC also arranges for companies receiving MEGA credits to benefit from other government incentives, such as job-training subsidies, infrastructure grants and local property tax abatements. Indeed, under its original authorizing statute, MEGA could provide Michigan business-tax credits only if the local government of the business's municipality provided a business incentive of its own.[*] This local government incentive is frequently the "plant rehabilitation and industrial development" property tax abatement permitted under Public Act 198 of 1974.[†]

Through 2008, the MEGA program agreed to provide, by its own estimates, $3.3 billion in state tax credits, all of which come with additional packages of other state and local incentives.[‡] The tax breaks are conditioned on beneficiaries creating or retaining certain numbers of jobs agreed to in advance.

Determining how many of those jobs have actually been created and the size of the credits granted is central to determining the program's success or failure. Specifically, a number of measures make sense in tracking the program's efficacy: 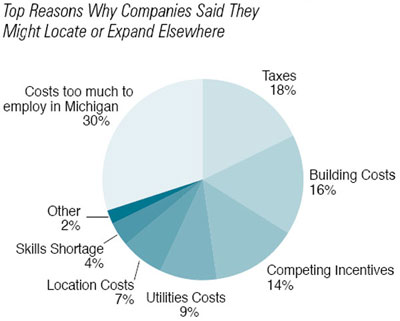 For example, a review of statements of cost disadvantages in MEGA "briefing memoranda" (see Graphic 1) permitted a Mackinac Center analyst in 2006 to determine how frequently businesses cited higher taxation, higher labor costs, higher worker compensation costs and so on in claiming the need for offsetting tax credits before locating in Michigan.[1] These are often matter-of-fact statements like, "When comparing the Michigan and Tijuana locations, the company estimates that wage rates in Tijuana are significantly lower."[2] Such information can help state lawmakers determine which tax, regulatory and policy reforms might help Michigan's business climate.

In the past, the data described in the six bullet points above has been available to anyone willing to request and sift through a stack of documents produced by the Michigan Economic Development Corp., the organization that oversees MEGA. Specifically, the documents are:

[*] This requirement was suspended for certain types of MEGA credits in 2004, and it was eliminated altogether in 2008.

[‡] This tally of MEGA credits may differ from the MEDC's due to differences in methodology. For instance, if MEGA determined that a company failed to meet the requirements of its MEGA agreement, the MEDC historically zeroed out the dollar figures on its "All MEGA Projects" spreadsheet. In contrast, the $3.3 billion figure includes the tax credits pledged in these cases.

[§] Currently, the value of the local property tax abatement or other local subsidy is provided only in the briefing memorandum and in many cases is absent. Previously, this information was available in the briefing memoranda and the MEGA annual report. Ideally, the data provided would explicitly state that this value is not just the number stated in the original agreement, but the amount that was actually awarded. It would also show the amount provided on an annual basis, not just a total. Nevertheless, the data that MEGA provided in the past was helpful, and it was much better than the patchy and sporadic information provided now. See "The Recent Reduction of Information" below.

[¶] Forgone state taxes are generally considered a "cost" by state officials, and to the extent that they are monies that would have otherwise been collected — i.e., in those cases when the firm would have located in Michigan anyway — there is some basis for this view. That said, we would not concede that allowing people to keep more of their own money is somehow a "cost" to the state.

[**] It is worth noting that if forecasters' assumptions about a recipient firm's performance are off, so too are claims that depend on this, particularly "spin-off" (or "indirect") jobs. In an earlier Mackinac Center Study, the authors determined that through 2004, MEGA deals should have produced 127 fully employed facilities. The authors found that only 10 deals produced the number of jobs promised; inevitably, claims of associated spin-off jobs were even more wildly overstated. (See Michael D. LaFaive and Michael Hicks, "MEGA: A Retrospective Assessment," (Mackinac Center for Public Policy, 2005), 22.) In fact, following the compilation of these figures in 2005, several of the 10 "success stories" stumbled badly — Kmart being one of them.