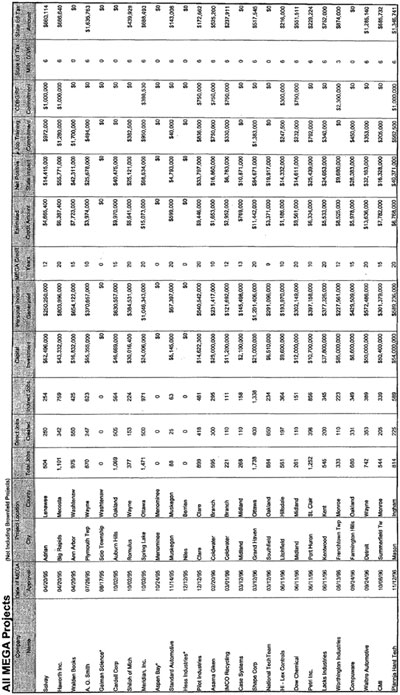 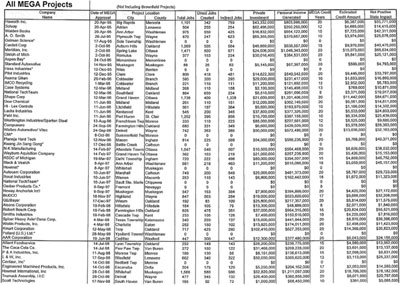 At the time, this loss of information was not critical, because other complete sources for the data existed. This is no longer the case now that some briefing memoranda fail to report information consistently and the MEGA annual reports to the Legislature include far less data (see "MEGA's Annual Reports").

Recent changes to the spreadsheets are even more troubling. Current MEGA reports involve older projects in which business-tax credits were granted against Michigan's previous business tax, the single business tax. Under the SBT, there were two ways businesses could earn business-tax credits in a MEGA deal: through jobs added or retained (an employment credit), or through new capital investment (a business-activity credit). The "MEGA Credits" spreadsheet formerly detailed the precise value for each year of a company's employment credit and business-activity credit, but for the past year, this information has been deemed "confidential" by the MEDC, and only a total business-tax credit is provided.[*]

This, too, occurred without warning after some 13 years of releasing the data to the public on request. This data was always vital to analysis of the MEGA program, because it allows an analyst to determine the precise tax revenue forgone as a result of the MEGA credit on a per-project basis.

For example, when Kmart filed for bankruptcy and ultimately moved its headquarters out of Michigan, it was possible to determine precisely what tax relief the firm enjoyed for creating jobs that were ultimately eliminated. Based on data from the discontinued "MEGA Credits" spreadsheet, it is clear that the company received five sets of MEGA credits worth more than $6 million in total over three years, and that after 2003, the company was no longer qualified for the credits.[6] The author has recently been unable to obtain such data from the MEDC, and this informational detail will no longer be available, according to MEDC documents obtained through the Michigan Freedom of Information Act. MEDC employees apparently consider these details confidential because of restrictions in the state Revenue Act.[7]

Moreover, after April 2008, compilation of the "MEGA Credits" sheets was abandoned by the MEDC in favor of a new computer database that omits some previously provided information (such as actual tax relief per company). In addition, the new reports are roughly 400 pages, while the old spreadsheet never exceeded 12 pages and was far more useful.[†]

It is difficult to see why the data previously provided on these spreadsheets was omitted when a new computer software program was adopted. There seems little justification for installing a new system that provides less data and fewer details.

[*] The author last received a report including this information in April 2008.

[†] The last iterations of the earlier spreadsheets, complete with now-unavailable tax relief information per company per year, can be viewed at https://www.mackinac.org/depts/fpi/mega.aspx. See "Appendix: A New Mackinac Center Database on MEGA."