As mentioned earlier, this annual report to the Legislature used to be one of two sources of data concerning local government incentive contributions. This information made it possible to tally the overall government assistance to a MEGA project, not just the value of state-level incentives.

The report no longer provides this information, however, and the briefing memoranda (the other traditional source for such data) have become so much vaguer recently that it is nearly impossible to consistently and confidently measure the total costs of a MEGA deal. 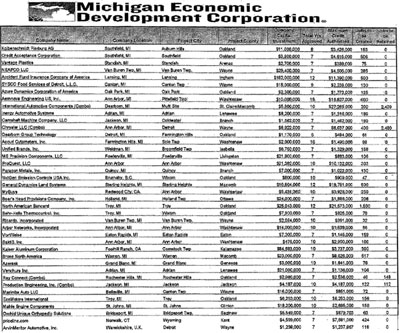 The full reports are markedly different. The 1998 edition contains a narrative of the company's history and the MEGA deal; an executive summary of the report; the project location, including the city and county; the location of the company's headquarters; the expected total jobs (both direct and indirect) to be created over the life of the deal; the average weekly wage, including the benefit package value as percent of total; the capital investment expected; the estimated net positive state government revenue impact over the life of the MEGA project, showing both the estimated state revenue forgone and the estimated state revenue gained; the projected state personal income generated over the life of each MEGA deal; and the explicit value of the local government's contribution to the MEGA deal through various local government business incentives.

Note in particular that the "Jobs to be Created" column in the 2008 report does not explain if the figures refer only to workers directly employed by the company, or if the figures also include alleged "spin-off" jobs forecasted by the REMI model and detailed in the MEDC "economic effects" reports. (In contrast, the 2007 report was explicit, labeling the jobs column as "Jobs Impact/Direct Jobs.") I have patiently attempted to clarify the meaning of this "Jobs to be Created" column and acquire an explanation for missing data. Unfortunately, there has been no constructive response to this simple query.[*]

Making matters worse, the columns "of the annual report of the activities of the Michigan Economic Growth Authority to the Michigan Legislature" required by law have actually changed from fiscal 2007 to fiscal 2008, although they were published only six months apart.[†] For instance, the fiscal 2007 report provides the column "Revenue Forgone: (MEGA Costs)," while the fiscal 2008 edition does not have that column. Conversely, the fiscal 2008 report contains several columns that are not found in the 2007 report. For example, the 2008 report contains a column for "Maximum Credit Authorized," a term whose meaning is unclear. The 2008 report also includes a column for "Jobs to be Retained," a term whose meaning seems reasonably clear, but whose purpose is unclear, since this figure did not appear in the 2007 report.

Nor was the 2007 report a model of clarity. A reader cannot tell explicitly, for instance, whether the "Revenue Forgone" column in that report is referring to the amount of tax revenue forgone in fiscal 2007 alone, or to a total amount of tax revenue forgone over the life of the MEGA credits, which could be many years into the future. A close inspection suggests it is probably the latter, but if so, legislators should realize that MEGA is providing the same piece of information as "Estimated Credit Amount" in the "All MEGA Projects" spreadsheet, as "Revenue Forgone/(MEGA Cost)" in the fiscal 2007 annual report, and as "Maximum Credit Authorized" in the fiscal 2008 annual report. In other words, like other elements of the report, this column is inconsistent, unclear and unaccompanied by any explanation. In short, the key component of the annual report to the Michigan Legislature raises more questions than it answers.

The remainder of the annual report lists little more than the company name and top officers at the firms in question, something that wasn't included in the older reports. This new information is trivial in comparison to the information that has been lost.

[*] For example, I telephoned an MEDC spokesperson on June 1, 2009, and asked if it would be acceptable to submit questions directly to her. I expressed my concern that some of my questions simply could not be answered using the Freedom of Information Act, but could be answered directly and quickly by a spokesperson. (Admittedly, I also harbored concerns that the MEDC might claim the 10 business-day extension allowed under FOIA law and then either send documents too vague to assist me or respond — as frequently occurs — that "no such documents exist." The spokesperson encouraged me to submit my questions in writing, and I did.

By June 12, I had not received a response from the MEDC. I followed up on my request with a voicemail and e-mail to the spokesperson, hoping for answers to my questions. I received a response by e-mail later the same day, after normal business hours. The e-mail read:

"We've had several similarly worded questions and requests come in multiple ports of entry recently from you/your staff and it's caused some confusion as to who's responding, whether they're currently in the FOIA queue or if they've already been handled. We don't' [sic] want to waste your time nor duplicate efforts on our end, so we'll be sorting through these early next week, cross checking for duplicate inquiries, reconciling with pending FOIA requests, etc. and then will get back to you."

I responded the following Tuesday: "I received your Friday e-mail. Naturally, I am a bit disappointed, since my questions were submitted to you on June 1. When might I expect a response this week based on your meeting? Today? Tomorrow?" As of July 28, six weeks later, the spokesperson had not responded.

A larger sample of the correspondence described above appears in "Appendix B: A Sample of Correspondence With the MEDC."