Yawning gaps in tax rates between states — especially neighboring states, such as Indiana and Michigan — can tempt people to smuggle. In economic terms, smugglers are engaged in arbitrage, attempting to capture the difference between state tax rates as profit. As long as the financial cost of the smuggling is relatively low, some people will perceive the net profit as sufficient to justify the risk of the illegal activity.

Interstate cigarette smuggling is not new. Graphic 5 shows a Michigan state policeman inspecting contraband cigarettes in 1951, when tax rates were a mere 3 cents per pack. 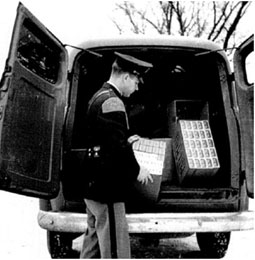 Source: Archives of Michigan. Photo taken in 1951 at the Jonesville Police Post in Hillsdale County.

As cigarette taxes have risen in recent years, however, so has smuggling. A number of scholarly studies have attempted to measure the degree to which cigarettes are smuggled across state borders.

[*] R. Morris Coats, "A Note on Estimating Cross-Border Effects of State Cigarette Taxes" National Tax Journal, December 1995, 573. University of Michigan economist Joel Slemrod cites Coats' findings in his own 2007 paper, but points out the study does not consider "enforcement regimes" that may raise the cost of cross-border acquisition of cigarettes.