Tobacco taxes are classified as "excise" taxes, which are sales taxes imposed on different commodities at different rates, such as specific taxes on cigarettes, alcohol or fuel.[*] A general sales tax, in contrast, is applied uniformly across a wide range of goods.

Graphic 2: Cigarette Excise Taxes for Each U.S. State in Cents per Pack 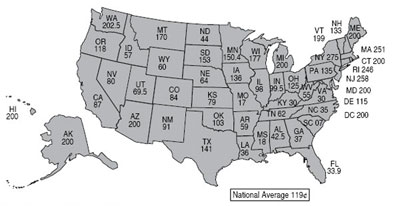 The lowest tax rate is South Carolina's at 7 cents per pack. Michigan is tied for sixth highest in the nation at $2.00 per pack, and New Jersey is second in the nation with a tax of $2.575 per pack.

Over the past few decades, tobacco taxes have gone up dramatically. As we have already noted, this increase has probably played a role in the decline of smoking in America. Nevertheless, smoking has not fallen nearly as quickly as taxes have risen.

Graphic 3 shows the average state cigarette excise tax rate (including Washington, D.C.) in cents per pack from 1990 through 2007. From 1990 to 1998, the rise is steady, but begins to increase from 1998 through 2001 before taking off at a considerably higher rate in subsequent years. 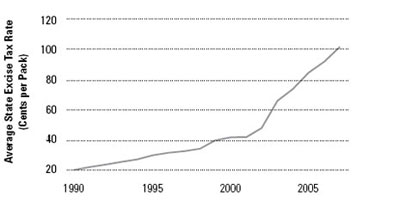 Source: Orzechowski and Walker, 2007,[22] and authors' calculations. Excise tax rates for all 50 states and Washington, D.C., were included in the computations. The average was calculated as the mean of the various excise taxes; the tax rates were not weighted to reflect state sales volume.

In the years immediately following 2001, many state governments had trouble balancing their budgets due to the Internet stock decline and the economic slowdown following the terrorist attacks of Sept. 11, 2001. Many state governments chose to increase cigarette taxes to generate new tax revenue, with the average increase from 2002 to 2003 being the most pronounced. Graphic 4 shows the cigarette excise tax for each state and Washington, D.C., for selected years. 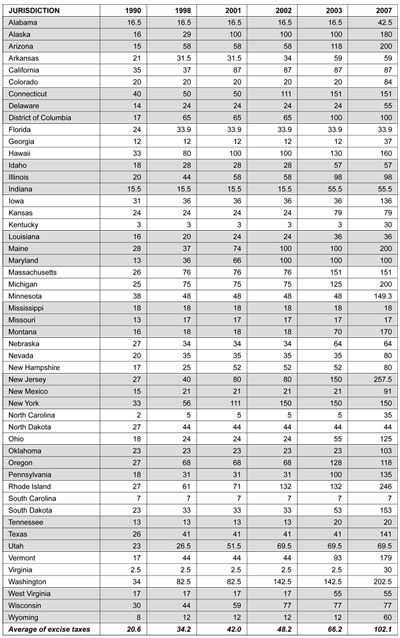 Source: Orzechowski and Walker, 2007,[23] and authors' calculations. Note that the 1998 tax rates listed for Massachusetts and Oregon took effect after the beginning of the fiscal year. Hawaii's tax was 40 percent of wholesale price until July 1, 1993.