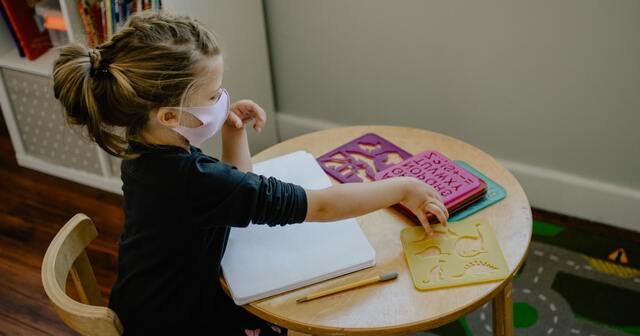 After a down year, Michigan school districts seek to boost enrollment. They will have to keep schoolhouse doors open, at least into October, to collect the funds that come along with students.

According to The Detroit News, leaders of the Detroit Public Schools Community District are looking to fill classroom seats with 2,000 more students than fall 2020. Months before the pandemic started, the state’s largest district registered its highest enrollment since 2011-12, only to lose students at the start of last school year.

Detroit mirrors a broader recent trend: The state’s public school system has enrolled fewer students every year since its peak in October 2002. Nearly 200 of Michigan’s 537 conventional districts, including DPSCD, counted more students in 2019 than they did the previous October. But the disruptions families faced from school building closures in response to COVID-19 helped reverse the trend for 165 of those districts in 2020.

Overall, district schools in Michigan experienced a one-year enrollment loss of 3.8% among K-12 students, even as charter public schools grew by 1.5%. Counting preschool students, enrollment in public schools fell well below 1.5 million, nearly hitting a low the U.S. Department of Education earlier predicted the state wouldn’t reach until 2025. Along with the rest of us, the federal department couldn’t have foreseen the far-reaching effects of a pandemic.

A big chunk of public school funding, known as the foundation allowance, is typically tied to an official October student count. Last year, however, state lawmakers cushioned the blow for the 86% of districts and 59% of charters that lost students. They guaranteed 75% of the formula dollars from the previous year’s count, effectively funding schools for students who were no longer there. And to accommodate the many students being taught remotely, state officials only required districts to have occasional teacher interaction with 75% of counted students to keep that funding.

With record levels of education tax dollars flowing to K-12 systems, the one-year experiment with counting students and funding schools regardless of in-person enrollment is over. Districts and charter schools once again closely link their fortunes to a fall count day: this year, it comes on Oct. 6.

But as the graphic below illustrates, it’s not as simple as numbering the heads of pupils who show up for class that day. A much smaller portion of the foundation allowance for the current school year is determined by a count made last February. And even if some students don’t show up on Oct. 6, they can still count for funding purposes if they return on a later date, depending on the reason for their absence. 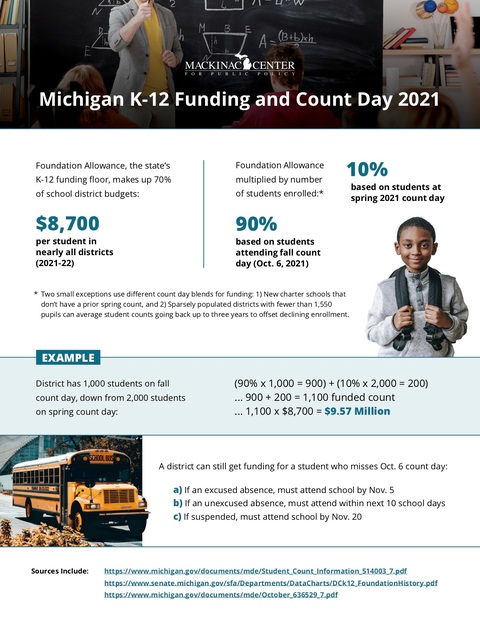 Even though public schools will miss out on $8,700 for each student who is not counted, they have other sources to fall back on, especially now. Billions of federal COVID relief dollars should be able to sustain some systems longer than others, regardless of how unsatisfied their customers may be.

Families across Michigan have become exasperated with their assigned schooling. The debate over student face masks provides perhaps just the most heated example. Many parents have protested county mask mandates, even as other are frustrated there isn’t a mandate for the whole state. Districts remain unable to please everyone.

Demand for alternatives appears to remain high, including for private schools and various approaches to learning at home, after a year of COVID-related disruptions and shortcomings. Districts lose a small share of funds for each student who switches to one of these options, but they incur no loss for a student who skips a few days of classes in October.

The school year now underway may show how many families have lost their sense of attachment to the schools where they’ve been assigned, and district officials face the challenge of figuring out how to respond.