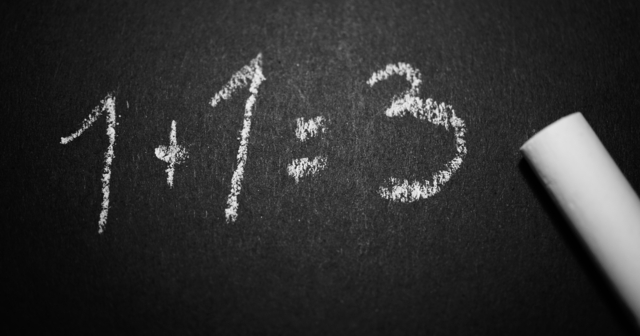 During the early months of the pandemic, many worried that lost revenues from restrictive economic policies would break public school budgets. But it turns out the worst fears for Michigan K-12 finances were misplaced.

In April 2020, the Mackinac Center responded to projected shortfalls with suggested budget items to cut, including areas of the school aid budget less focused on classrooms and student needs. Local and state officials braced themselves for a disruption to the years-long trend of rising per-pupil revenues in Michigan’s K-12 system, a disruption that never came.

Instead, the 2019-20 school year pushed past $15,000 per student, an all-time high following 1.6% yearly growth after inflation. According to new data collected by the state’s department of education, the next year brought even more dramatic growth.

In 2020-21, Michigan’s K-12 system took in $16,881 for every enrolled student, 8% more than the year before in inflation-adjusted dollars. The increase was fueled in part by a larger-than-usual enrollment loss, as more families took to private education and homeschooling while other students just bowed out. From the previous year, schools had both more money and fewer pupils to educate. 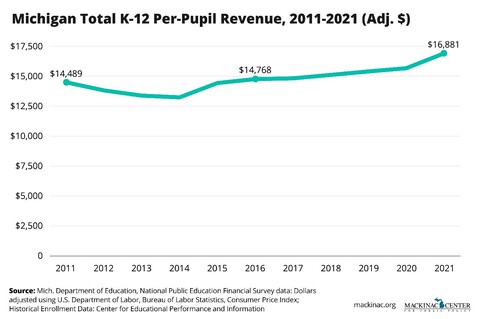 Michigan’s rising K-12 intake in 2020-21 was bolstered by an extra billion dollars from the federal treasury. About $825 million came in the form of special COVID relief, or about 14% of the total due over multiple years. Yet our state’s per-pupil revenues would have grown, even without Congress approving a cent for these purposes.

One telling trend in Michigan school finance was disrupted, if only slightly. The state’s intermediate school districts did not take up a larger share of overall K-12 spending for the first time in 15 years. Even so, these largely bureaucratic agencies spend one dollar for every nine used by local districts and charter schools.

The state’s record public school funding occurred during a year in which many districts closed classrooms for extended periods of time. These districts tended to be the most well-funded. A few never opened throughout the whole academic year. While researchers are still uncovering the full extent of these policies’ impacts, it’s clear that more students fell further behind in their learning.

In making future pleas for more funding, advocates may find these realities inconvenient to mention. But balanced reporting would acknowledge this important context, which underlines the importance of shifting from school aid to student aid.

Michigan schools have every reason to anticipate even more dollars for each student in the future, even if funding is unlikely to continue increasing at last year’s rate. It’s time to talk more about how resources are used and how much control parents ought to have over funding.