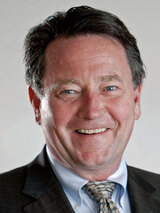 Dr. Mark J. Perry is professor emeritus of economics at the Flint campus of the University of Michigan, where he taught undergraduate and graduate courses in economics and finance since 1996. Starting in the fall of 2009, Perry has also held a joint appointment as a scholar at the American Enterprise Institute and is currently a senior fellow there. Perry holds two graduate degrees in economics (M.A. and Ph.D.) from George Mason University and an MBA degree in finance from the University of Minnesota.

Perry has been best known in recent years as the creator and editor of one the nation’s most popular economics blog, Carpe Diem. Perry has written on a daily basis since the fall of 2006 to share his thoughts, opinions and expertise on economic issues, with a strong emphasis on displaying economic data in a visually appealing way using graphs, charts and tables.

Gas Prices Are Complex, but Not Mysterious

Good News About the Bad Economy

The Good Old Days of Cheap Gas Are Here Now!

Consumer, Not Corporate, "Greed" Is Ultimately Behind Layoffs

It's Time to Give Overtaxed Americans a Break

Cost of Government Goes Up While Costs of Living Go Down

Intuition and Good Intentions Are Not Enough to Help Disadvantaged Workers