What a Right-to-Work Law Would Mean for Cities

There is a distinct likelihood that Michigan voters will be presented with a right-to-work ballot initiative or constitutional amendment over the next few years. Assuming that such a law passes, what would the effect be for local governments and their employees? While a right-to-work law would not have a large, immediate or direct impact on the operation of county and municipal governments, over the long term such a law could do much to indirectly improve their financial situations.

Right-to-work protections would not change the basic process of collective bargaining: governments throughout Michigan would still be expected to bargain in good faith with their unionized employees, and existing collective bargaining agreements would remain in effect. Nor would a right-to-work law affect the binding arbitration procedure for police officers and firefighters. What would change is the status of "agency fee" clauses that require all workers covered by the contract to either join the union or pay an agency fee in lieu of membership dues. Under right-to-work legislation, a collective bargaining agreement could no longer include this requirement; union membership and financial support would be left to the discretion of the individual employee. (Depending on the specific proposal, agency fee clauses might be rendered inoperative immediately, or they might be allowed to remain in place for the remainder of the existing contract but prohibited in subsequent agreements.)

Equally important, though further down the road, right-to-work protections may go a long way towards establishing a better balance of political power at city hall. One of the worst-kept secrets in Michigan politics is the extent to which unions have invested in political activism. While union membership is dwindling in the private sector, it remains strong among government employees.

There are tradeoffs involved. Union officials would be less likely to support expanded payrolls, but would be more likely to pursue more lucrative contracts for existing workers after the enactment of a right-to-work law. Collective bargaining would remain contentious, but otherwise a right-to-work law would probably reduce the funds available to union officials for political activism, giving local officials more room to focus on matters of policy.

Being a right-to-work state is not a panacea. Michigan government will still need to contain costs and reduce the burdens of both taxation and regulation on families and businesses. Investigating privatization and outsourcing of city services can and still should be a priority for municipalities regardless of Michigan’s right-to-work status, but a right-to-work law is likely to make the state more attractive to job-creating businesses while reducing the political influence of unions, making needed government reforms easier to implement. 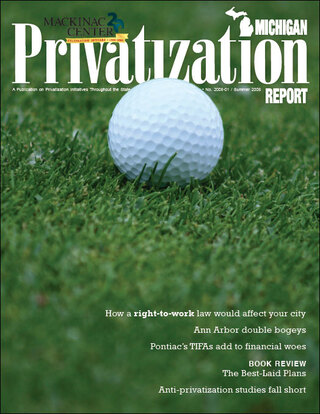