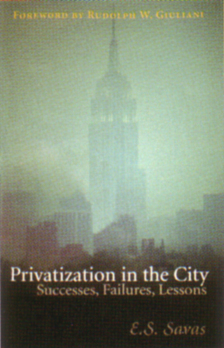 New York City’s 107th mayor hopes to become America’s 44th president. When most Americans think of Rudy Giuliani, they recall his leadership in the aftermath of the Sept. 11, 2001 attacks. They might also know him as a tough prosecutor who brought crime rates down and cleaned up the city, or as the mayor who slashed the number of people on welfare by 60 percent. What is much less known outside of the Big Apple is the remarkable extent to which he deployed the private sector to fix day-to-day problems in city services. The Giuliani record from 1994 to 2001 is loaded with powerful lessons for cities big and small.

Who should read this book? Any mayor who wants to get things done and doesn’t believe they must be done the same as ever.


One of the country’s foremost authorities on privatization, E.S. Savas, sheds light on all forms of private delivery of public services in pioneering cities like Phoenix and Indianapolis. Anaheim, Calif., the reader learns, contracts out for no fewer than 122 activities. But the main focus of the author’s attention is New York. "Privatization in the City" is, without a doubt, the most complete and readable account available of how the Giuliani administration pulled New York’s public services from the municipal dumpster, spiffed them up and cut their cost.

Who should read this book? Any mayor who wants to get things done and doesn’t believe they must be done the same as ever. Any city council member who wants to improve services and avoid raising taxes. Any city manager who wants to know how to use competitive forces to modernize the way a city runs. Any union member who still mistakenly thinks privatization can’t work. And any frustrated citizen who needs facts and examples to encourage local officials to get off the dime.

Of 82 privatizations proposed by the Giuliani administration, 66 were accomplished, benefiting both service users and the taxpayers who paid for them. The city was able to cut costs by more than $6 billion, saving the average family of four nearly $3,300 over eight years. Twenty-three city taxes were reduced or eliminated. Giuliani proved the city could be governed, something many observers had come to doubt by the early 1990s. Giuliani, says Savas, "abandoned New York’s failed policies and infused new values, making government work for the benefit of the public in a city long ruled by narrow interests."

When the administration opened up the city’s Department of Parks and Recreation to competition, just the threat of it prompted city unions to dramatically improve operations. Voluntary support for cultural institutions increased when the city cut its subsidies. A private, nonprofit group called the Central Park Conservancy now manages the world’s premier urban park. The sale of city-owned assets including gas stations, parking garages, residential buildings, two radio stations, a television station, a luxury hotel and even the Coliseum exhibition center generated one-time revenues and stopped the flow of annual subsidies for loss-incurring enterprises. Competitive bidding saved millions of dollars for fleet management, school custodial operations, water-meter reading and dozens of other services.

Not so successful were Giuliani’s efforts to privatize hospitals, prisons and the city’s Off-Track Betting Corporation. Among the lessons Savas gleans from those experiences are these: the process of privatization must be open and transparent; union opposition can deter firms from bidding and sabotage the effort from the start; and a campaign to educate the public can sometimes be crucial to success. Nonetheless, Giuliani was able to summarize his privatization accomplishments with these words:

"We now have a broad array of privatization programs that impact nearly every aspect of the city government. ... We divested ourselves of businesses that more appropriately belong in the private sector ... Now these properties generate tax revenues and private-sector jobs."

Nearly 70 pages of the Savas book are consumed by Appendix B: Privatization Initiatives in Detail. This valuable addition provides short descriptions of functions, services and assets; the date when they were privatized and by what method; and a word about the benefits and implementation.

Rudy Giuliani was by all accounts, from friend and foe, an extraordinary mayor. He set about to fix a nearly dysfunctional city and succeeded by pursuing what made good management sense. Privatization was a core component of his strategy. That doesn’t necessarily mean that he’d make a good president, but saving a major city is a qualification most candidates can only envy.

Lawrence W. Reed is president of the Mackinac Center for Public Policy.