The city of Pontiac is facing a fiscal crisis that requires innovative thinking and daring action. There has already been some movement in the right direction. Pontiac is contracting for some financial services and looking into doing the same with others, such as the management of the city golf course. Pontiac officials — to their credit — are looking at a number of potential asset sales to help shore up the city budget.

It is our hope that the sale of such assets would not be used to plug short-term gaps in the budget, but to pay down city debt and thus change the long-term, structural nature of the city’s fiscal position. The city must adopt a bold strategy for privatizing its diverse portfolio of property.

Consider a few opportunities that Pontiac either is or should be investigating:

· Pontiac Municipal Golf Course. The private sector has been providing golf to the public since the earliest golfers laid the first greens. There is no reason the Pontiac course should not be sold.

Selling this course to the highest bidder would generate millions of dollars. According to the Detroit Free Press, Arthur McClellan Jr., Pontiac City Council president, reported "five potential bidders have inquired about the property." He thinks the city would want between $3 million and $4 million for the 125-acre course.

Assume a sales price of $3.5 million. Not only would the city generate this revenue, it would begin collecting approximately $31,400 in property taxes as the parcel moved from public to private ownership. Another $31,500 would accrue to school operating millages with another $31,700 being distributed to other entities. Lastly, it is possible that the quality of services could improve.

· Pontiac Silverdome. The city has been trying to sell this property for four years without success.

The property cost $55.7 million to develop in 1975 (about $210 million in today’s dollars) and, according to published reports, the city currently appropriates more than $2 million a year for the city’s stadium fund and at least $1.6 million is spent just maintaining the property.

The most recent attempt to sell has the city reviewing proposals submitted by companies seeking to market the property, following a nationwide search that yielded nearly a dozen responses. While we applaud the effort to move forward, after four years of delays we question the need for niche companies. Brokers and attorneys are frequently involved in unusual and expensive real estate deals. The city may have been better off simply issuing an invitation to bid and advertising it in international and national newspapers and real estate magazines.

What could such a property fetch? One serious offer by developers was reported at about $20 million. Left undeveloped, a property of this value might generate more than $535,000 a year in new tax revenue (53.51 total mills) to the city, state and schools, among other areas. (In November, city voters approved property tax increases totaling three mills.)

· Parking lots. Many cities own and/or operate parking garages, as does Pontiac. Pontiac should sell these assets to the highest bidder.

In 2005, the Michigan Privatization Report surveyed the state’s 20 largest cities and found that eight owned and operated their own garages while others own them but contract for their management. Pontiac controls 3,960 parking spaces in its garage and 13 lots and allows the Downtown Development Authority (an economic development group) to manage them. All should be sold to the highest bidder. Moreover, the DDA maintains more than 200 metered parking spaces. A contractor could be hired to manage use of the meters.

Jim Haugsland, senior vice president of sales for Duncan Solutions, Inc. told MPR that when his company installs multi-space meters and assumes responsibility for citations issuance, processing and parking debt collections, municipalities typically see their parking revenue increase as much as 100 percent. Pontiac could certainly use a boost like that. An audit by the Whall Group, a risk management and fraud detection business, indicates that the DDA maintained such poor internal controls on its meter money collection that 2005 revenue was as much as $140,000 lower than it should have been.

How do businesses such as Duncan Solutions improve revenue collection?

New, high-tech meters are programmed to increase or reduce the price based on demand for space and charge higher fines the longer an auto overstays its welcome. Moreover, some meters today take credit cards or let you pay for your parking by cell phone. Cell phone users can get a text message to inform the user his meter is about to run out of time. Newer meters also can automatically reset to zero when a car pulls away, meaning no more free parking courtesy of the previous user. Lastly, these high-tech devices also come with valuable "internal controls" to ensure that every coin collected by the meter makes it to treasury. In cities with older meters this hasn’t always happened.

What would the Pontiac parking garage and lots sell for? The 13 city lots, parking garage, and meters generate about $930,000 annually, according to Dennis Scanlon of the DDA. That figure includes leases, daily fees and meters. Street meters account for about $60,000 of the above revenue. Cash flow of this nature would undoubtedly attract buyers, but to what degree will remain a mystery until the city actually collects bids.

The city is discussing a wider sale of property that includes its cemeteries and the Strand Theater. While every property sale may bring with it its own set of complications, the city should be applauded for investigating such opportunities and encouraged to cast the widest net possible.

In light of this idea, the Mackinac Center wishes to offer one piece of advice:Do not simply plug a single or series of deficits with the revenue generated from the sale of assets. Someday, the city will run out of assets to sell. It is incumbent upon Pontiac leadership to reshape the structural nature of the budget. One way to do that is to eliminate city debt (and thus, spending obligations) with the new revenue.

The city deserves a great deal of credit for exploring the sale of its assets including the Pontiac Silverdome, its golf course and other properties as well. The city would be well served if its officials sold every property that was not essential to the efficient functioning of its municipality, and altered the city’s fiscal policy landscape with the resulting revenue. 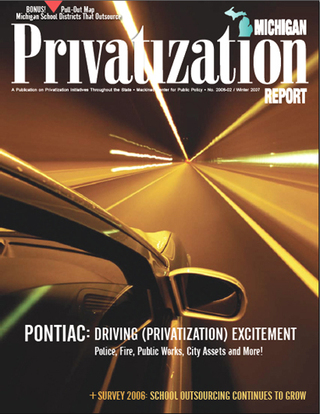