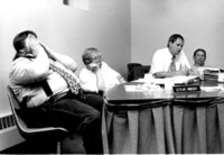 Every summer in Michigan, education employee labor unions and public school district officials meet to negotiate wages, benefits, and terms and conditions of employment for teachers, custodians, food workers, bus drivers, and other employees. And every summer, these unions argue forcefully against the privatization of any education-related support services. Privatization of support staff, however, is an important tool that school officials who want to provide the best quality education to children should keep as an option. 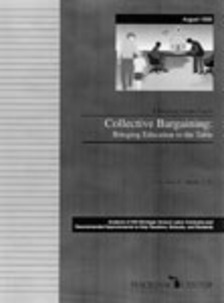 The study, Collective Bargaining: Bringing Education to the Table is available from the Mackinac Center for $10 postpaid.

Union representatives for support service staff view their job as protecting the employment of their dues-paying members, which explains their opposition to privatization. There is an element of organizational self-interest in this opposition: Unions benefit financially and politically from more dues-paying members, so the contracting of jobs to a privatized, potentially nonunion workforce is undesirable.

"Do your best to split the board on crucial issues through contacts with individual board members or misrepresentation [author's emphasis] of the issues to the public through press releases."

But public schools do not exist to provide employment to their employees, be they instructional or nonin-structional staff. The primary job of schools is to educate students; their corollary responsibility is to do so in the most efficient and effective manner with the resources entrusted to them.

Most school boards understand these responsibilities and take them seriously. Unfortunately, they often find themselves stymied in their ability to carry out these duties by the sometimes-conflicting goals of old-fashioned industrial labor unions like the Michigan Education Association (MEA), whose primary responsibility is not student achievement but job security and financial benefits for its members.

In pursuit of job security, higher wages, and better benefits, unions sometimes resort to questionable bargaining tactics. Consider the following audio-taped advice the MEA has used to train its union negotiators. (The complete training transcript is available at www.mackinac.org/9405.) It offers a disturbing look inside the political wrangling of public education collective bargaining:

Why would unions such as the MEA go to such lengths when bargaining? Because there is much at stake. In Michigan, nonteaching personnel account for 53% of all public school employees. A loss of just 20% of these employees to a more efficient, for-profit vendor could mean a loss of more than a million dollars in union dues.

A new Mackinac Center for Public Policy study, Collective Bargaining: Bringing Education to the Table, analyzed the union collective bargaining agreements (including salary and benefit data) from 560 of Michigan’s 612 K-12 and intermediate school districts. The study discovered, among other things, that 82% of a school district’s budget, on average, was dedicated solely to the salary and benefits for school staff. One district, Carmen-Ainsworth in Lapeer County, spends 92% of its per-student expenditure on district employees, leaving only 8% for textbooks, classroom materials, building repair and maintenance, and other vital budget items.

How could privatization of unionized support staff help Carmen- Ainsworth? In the 1997-98 school year, the district spent nearly $4 million providing in-house busing ($1,491,921), custodial ($1,980,307), and food services ($459,793). Savings of 20% resulting from privat- ization—a conservative estimate exceeded by many Michigan school districts—would save the district $786,404 annually for these services.

Savings from privatization could be even higher. A 1993 analysis of East Lansing’s school custodial costs suggested that the district could save over 50%, or $1 million annually, simply by contracting for janitorial services. (Instead of privatizing to avoid a 1997-98 budget shortfall, Lansing school officials chose to lay off 50 general and ten special education teachers.) In addition, some companies purchase district equipment (such as old buses), which provides schools with an additional cash infusion. Innovative, for-profit companies also have strong inventives to improve service to districts.

No study has shown that large expenditures of teaching staff have improved student performance. It makes even less sense to break the education budget on support staff. Despite the wishes of education labor unions, school boards should never bargain away their option to privatize support staff functions, if that is what is needed to meet their commitment to their students and community. Privatization must remain an option to be considered as a matter of practicality and principle.

Privatization: On The Honor Roll