"End of the Line" for Amtrak Subsidies? Think Again 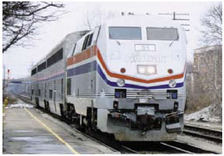 In 1970, Amtrak — a federal, quasi-public corporation — was created by the federal government to help increase passenger use of trains. Taxpayers were promised a profitable system within three years. More than three decades have passed and Amtrak has yet to turn a profit in any year, despite promised reforms.

Since its creation, Amtrak has absorbed more than $29 billion in subsidies and more than $6.5 billion since 1997 alone. It was in 1997 that a federal reform board mandated that Amtrak either become profitable by 2003 or be liquidated. Both the federal government and the state of Michigan must stop providing cash subsidies to this unnecessary and expensive intervention in the transportation marketplace. Taxpayers would be better off with some sort of privatized version of Amtrak, but that does not look like it will happen in the short run.

Ending Amtrak subsidies completely and selling off the corporation’s assets would not end passenger travel altogether; it would simply make the alternatives more affordable.

President Bush attempted to prompt needed reforms of Amtrak when he introduced his fiscal 2006 budget, which would have removed all operating funding for the system unless needed reforms were made. Last June Congress reinstated hundreds of millions of dollars in funding to ensure that money-losing routes outside the Northeast corridor would remain operational. Initial reform proposals might have resulted in the elimination of 17 of the most expensive routes outside the Northeast corridor.

Bush’s Amtrak reforms had three components, according to Ron Utt of the Washington, D.C.-based Heritage Foundation.

Doing so could save hundreds of millions of dollars annually. According to the Wall Street Journal, the Bureau of Transportation Statistics collected information on federal subsidies in four areas of transportation: rail, bus, flight, and highways and then divided these figures by passenger miles traveled. This allows researchers to make cost comparisons among different modes of transportation. Amtrak had the largest subsidy at $186.35 per thousand passenger miles versus just $6 for airlines.

Amtrak maintains three routes in the state of Michigan: Detroit, Port Huron, and Grand Rapids, all of which roll to Chicago. The Port Huron and Grand Rapids routes are subsidized by the state of Michigan. In fiscal 2006, Michigan taxpayers may directly contribute more than $7 million to cover the shortfall in revenues necessary to maintain these routes. Granholm’s budget recommendation for 2006 was $7.1 million but it appears that the house will remove $1 million as part of its overall budget trimming exercise. This is just a portion of the total subsidy, however, because the federal government foots part of the bill for the Port Huron and Grand Rapids routes.

Amtrak should prepare itself for privatization. There are a few primary types of privatization: competitive outsourcing and commercialization are two of the most popular forms. In competitive outsourcing, a unit of government hires a private firm to operate a particular service under contract. Commercialization occurs when a government gets out of a particular business entirely. If Amtrak were commercialized, for instance, the government could sell everything from its trains to access to its stations and repair equipment.

Passenger train privatization would not be a novel concept in much of the world. According to Joseph Vranich, author of "End of the Line: The Failure of Amtrak Reform and the Future of America’s Passenger Trains," 55 nations around the world are "privatizing, devolving, or regionalizing their national rail services."

Britain has one of the more exciting reforms to consider. According to Vranich the increase in ridership in Britain alone since its 1993 rail privatization is larger than the total number of annual Amtrak passengers annually. Indeed, passenger use of railroads in Britain is higher today than at anytime back to 1947, when the rail network was far more extensive. The British experience is based on a system of franchises awarded to 12 corporations that have won the right to provide passenger rail services throughout the United Kingdom. The brash entrepreneur Richard Branson of Virgin Records owns one franchise. The trains are all owned by a different company and leased for use to the franchisees.

Ending Amtrak subsidies completely and selling off the corporation’s assets would not end passenger travel altogether; it would simply make transportation alternatives more affordable by leaving aditional resources in taxpayers’ hands. It is time to make this archaic entity part of America’s and Michigan’s past.

(Author’s Note: As MPR went to print in September, Amtrak’s future was still being debated. However, a Sept. 21 news report indicated that Amtrak has conceded a willingness to let private companies bid to operate some routes. "Private operators need to be given a shot," said Amtrak’s chairman, David Laney.)

Michael D. LaFaive is director of fiscal policy for the Mackinac Center for Public Policy. Permission to reprint in whole or in part is hereby granted, provided that the author and the Center are properly cited.