Governing by Network: The New Shape of the Public Sector 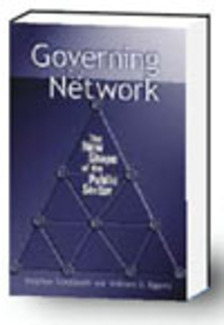 The following is a book review of "Governing by Network: The New Shape of the Public Sector," by Stephen Goldsmith and William D. Eggers; Brookings Institution Press, Washington, D.C.; 2004.

Garnering attention in many halls of government including Lansing in recent years is a book by David Osborne and Peter Hutchinson titled "The Price of Government: Getting the Results We Need in an Age of Permanent Fiscal Crisis." Billed as a "step-by-step roadmap for change," the book offers a mixed bag of suggestions for budgeting, restructuring and consolidation — some good, some questionable, but few that are truly as "radical" as the authors claim. As some reviewers have noted, the book dusts off and repackages a lot of ideas from the "reinventing government" craze of the 1990s, an effort that largely fizzled in the face of resistance from entrenched bureaucracies and status quo politicians.

A more recent book offers new promise. "Governing by Network: The New Shape of the Public Sector"by Stephen Goldsmith and William D. Eggers centers around the premise that Big Government is here to stay and needs to be better managed. It deserves a prominent place in the libraries of every officeholder who wants to succeed in an era of fiscal stringency because it plainly argues that good government doesn’t mean more of it. Rather, it means redefining what government’s responsibilities are and performing them by directly involving both the private for-profit and nonprofit sectors — even to the point where the government’s "customers" enjoy the provision of government services without coming into contact with a government employee. Take the best of Osborne/Hutchison, add this book, and you have a recipe for some real, positive change.

Goldsmith and Eggers challenge the reader to think of government less as the actual provider of certain goods and services and more as the facilitator of them. By encouraging networks of private and nonprofit individuals and organizations, government can often get its job done better, quicker and cheaper. If customer satisfaction is to be a cornerstone of better government — and too often in the past, it just hasn’t been high on the list of government priorities — then this book deserves the high praise it is eliciting across the political spectrum.

This concept of "networking" central to the book’s thesis is more than theory. The more forward-looking, customer-oriented, cost-conscious governments — primarily state and local — are already moving in this direction. In a review of the book for the Democratic Leadership Council’s Blueprint magazine, Marc Porter Magee notes that the advantages of the networking approach "include greater specialization to handle America’s increasingly complex public problems, greater speed and flexibility to explore alternative solutions, and increased reach to implement broad-based alliances and make government funds go further." Goldsmith and Eggers provide a rich collection of revealing examples, drawing lessons and offering advice for future finely-tuned improvements.

Community-based nonprofits in Florida run the child welfare systems in dozens of counties, "and the state’s entire child welfare system is slated for eventual privatization." For-profit firms are managing some public schools. The National Park Service has teamed up with a nonprofit group to refurbish the Golden Gate National Recreation Area in San Francisco. Goldsmith himself, when he was mayor of Indianapolis in the 1990s, saved millions of dollars and improved dozens of city services by creative outsourcing with private groups and networks.

Nonetheless, notions about improving government should not be seen as arguments for government to be involved in anything as long as it gets better at it. Indeed, with government combined at all levels consuming a portion of personal income many times what it ate a century ago, strong arguments exist for governments to do less by withdrawing from certain activities altogether. By its tax burden alone, it can crowd out private initiative even when it contracts with it.

As an extreme hypothetical example, the fact that a city-owned pizza parlor could be improved by contracting out to private pizza makers instead of using taxpayer-paid government employees shouldn’t distract us from the conclusion that no level of government should be baking pizzas at all. One wishes that Goldsmith and Eggers had said more on this issue, but if one starts with the assumption that a given service is indeed a proper one for government, their book points the way to getting it accomplished with the welfare of the taxpaying and service-consuming public being the top priority. The authors devote considerable space to the problems of networking with nongovernmental groups, and explain numerous ways to anticipate and preempt those problems. If you are a public official, those are precisely the details you need to know.

By empowering private people and their networks, government can move beyond merely tinkering with old ways of doing things and genuinely reform itself. Done properly, "governing by network" can treat festering public sores with cures instead of band-aids. That ought to put the Goldsmith and Eggers book at the top of every public official’s 2005 must-read list.

Lawrence W. Reed is president of the Mackinac Center for Public Policy.