The War Against Excellence 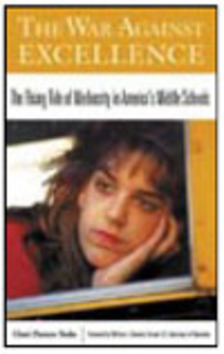 In 1983, the U.S. Education Department’s National Commission on Excellence in Education published its watershed report, "A Nation at Risk." The report famously stated, "If an unfriendly foreign power had attempted to impose on America the mediocre educational performance that exists today, we might well have viewed it as an act of war."

Since then, there has been a great deal of talk about improving the educational system. Some legislation has been passed purporting to raise standards.

But on the whole, it’s hard to perceive much improvement. In fact, if author Cheri Pierson Yecke is correct in "The War Against Excellence," things have gotten worse, particularly at the middle school level.

Yecke is a former U.S. Department of Education Commissioner for Minnesota. Her volume is the latest in a stream of books by a multitude of authors in recent years exposing unpleasant truths about government schools.

This stream is fighting a broader current. School districts and employee unions invest mightily in public relations to keep parents, taxpayers and politicians convinced that "public education" is doing wonderfully, but just needs more money. "The War Against Excellence" pulls back the curtain to reveal that over the last 20 years or so, middle schools — usually sixth grade to eighth grade — have been infested with an alarmingly anti-academic mindset.

According to the author, five beliefs that progressive education theorists embrace have infiltrated the middle schools. Yecke does not say that these views are confined to middle school, only that the problem seems worst there. The five views can be stated briefly:

University of Florida Professor Paul George, one of the educational "progressives" whom Yecke quotes, opines that middle schools should become "the focus of societal experimentation, the vehicle for movement toward increasing justice and equality in the society as a whole." "Schools," he writes, "are not about taking each child as far as he or she can go. They’re about redistributing the wealth of the future."

The United States has always had plenty of educational theorists eager to use government schools as experimental laboratories for their own notions about the reformation of society, but the current crop seems to have been particularly effective in getting their ideas implemented.

Yecke discusses several distressing manifestations of those beliefs. One is the attack on ability grouping. Schools have customarily followed the practice of putting brighter students in accelerated classes, so they can proceed at a faster pace; sometimes, too, schools have grouped slower students together, so they can receive special attention.

To egalitarian theorists, ability grouping is a practice that is both educationally bad and morally wrong. Yecke quotes education activist Elizabeth Cohen on the supposed need to redesign education along egalitarian lines:

What is at stake here is the attempt to undo the effects of inequality in society at large as it affects the day-to-day life of the classroom. Social scientists have documented the ways in which classrooms tend to reproduce the inequalities of the larger society. Undoing these effects is an ambitious undertaking. Nonetheless, the application of sociological theory and research to the problem of increasing equity in [the] heterogeneous classroom leaves room for hope that these goals are within our reach.

From that statement, it is evident that the educational reformers who want to remake our schools as a prelude to remaking society would rather that the brightest children be held back from their natural learning pace in school so that there will be less inequality among adults in the future. If gifted kids can be slowed down, the thinking goes, they wouldn’t be so successful later in life, thus taking a big step toward so-called "social justice."

That this leveling down would make everyone poorer in the long run by retarding those who have the most ability seems not to bother the activists.

The abolition of ability grouping has met with strong resistance from parents of gifted children, who resent having their kids held back just to satisfy the egalitarian impulses of education theorists. Yecke quotes one parent, who says, "The problem with this forced redistribution of intellect is that it limits my son’s educational opportunity and intellectual growth. Advocates of collaborative learning argue that it’s more important to encourage socially desirable aspirations than to develop individual students’ knowledge base and intellectual skills. I disagree." Unfortunately, the complaints of such parents are usually met with indifference by school officials.

Another manifestation of the egalitarian impulse is the move toward "cooperative learning." That’s another of those warm and fuzzy notions that hides an unpleasant concept, namely that students should work and be graded in groups, rather than individually. Again, this is supposedly necessary to correct an underlying social injustice.

The obvious problem with cooperative learning is that the smarter or more diligent students do most of the work, but must share the credit. To the theorists, this approach to education performs the vital task of informing the bright kids that they have to "share" their talents, and of discouraging them from using their ability to their own benefit.

Yecke writes, "(S)tudents who have completed their work can tutor others or perform clerical duties — but they cannot be allowed to work to the extent of their abilities and get ahead of the class." When parents of gifted students complain that school time is largely wasted for their kids, and that "cooperative learning" is holding them back, the educational theorists tend to reply that the research does not show that any educational harm is done to bright kids by holding them back so they can learn responsibility.

The author finds this "research" to be very feeble and reports that some of the activists privately acknowledge that their program does hinder the progress of bright students, but they regard it as a price worth paying in order to achieve their goals of "social equity."

The author is rightly concerned about the spread of the egalitarian vision of school, observing that it has been absorbed into the curriculum of many college education programs. Teachers in training often hear from their professors that these ideas are widely accepted and that they should aspire to become "change agents" within their schools.

Yecke is not optimistic about a quick reversal back to school cultures that emphasize academic achievement; the egalitarian mindset is too widespread. Fortunately, parents who can see that their children are being used as the guinea pigs in a sociological experiment have alternatives. Yecke cites the example of Maryland’s Howard County, where the school administration chose to ignore parental protests against grouping students of unequal abilities together. As a result, the number of parents choosing either private schools or home-schooling in Howard County has risen by 50 percent during the last decade.

"The War Against Excellence" will startle readers who are unaware just how explicitly many middle schools set out to homogenize children and use the classroom to remedy society’s imagined ills. Revealing to parents the often-unreported activities and theories practiced in their children’s schools is worth the price of the book.