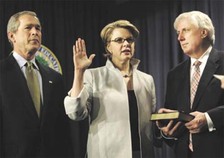 U.S. Secretary of Education Margaret Spellings, shown here with President Bush and her husband, Robert Spellings, was sworn into office on January 31, 2005. She has promised “room to maneuver” in administering the No Child Left Behind Act, but she says states should not expect many waivers.

The No Child Left Behind Act, passed by Congress in 2002, is a landmark in federal education law. In the words of a federal government Web site devoted to the act, NCLB is designed to improve student achievement through "strong incentives for better academic results," "more (policy) freedom for states and communities," "proven education methods" and "more choices for parents." The stated intention of the law is to see all American children achieve high standards, regardless of "poverty, race, ethnicity, disability (or) limited English proficiency."

In October, a national coalition of more than 20 organizations dealing with education, civil rights, children, disabilities and citizens’ concerns called for major changes to NCLB. The coalition’s requested reforms included changes in the act’s progress measurements, sanctions and funding. Among other specific changes, the coalition is collectively requesting a raise in authorized levels of federal NCLB money to cover a substantial percentage of the costs that states and districts will incur in carrying out the remedies required under the NCLB in cases where students repeatedly demonstrate weak academic performance. The coalition also argues that the federal government has failed to "fully fund Title I" federal monies for disadvantaged children. Since these Title I monies are, along with other federal title monies, an important part of the money available to schools for NCLB, the coalition argues the NCLB is underfunded and is thereby failing "to ensure that 100 percent of eligible children are served."

She notes that the U.S. Government Accountability Office addressed the question of NCLB’s funding earlier this year. It found that NCLB is not a mandate because the requirements in the law are a result of states and local districts voluntarily deciding to participate in a federal financial assistance program.

Under the GAO’s reading of the law, states choose to accept federal funding in exchange for performing annual testing and offering a plethora of assistance to failing schools, such as tutoring, transportation to alternative schools of choice, mandatory hiring of highly qualified teachers and paraprofessionals, reopening failing schools as charter schools and replacing existing school administration and staff. Thus, Wells explains: "In order to receive federal financial assistance, schools and local districts agree to play by certain rules. Otherwise, they can decide to opt out of taking federal funds."

Critics of the NCLB’s current structure, however, argue that this view is an unrealistically narrow interpretation of the predicament states face. A state that chooses to opt out of NCLB requirements will also forgo a significant portion of some of the federal title monies associated with the act. These federal dollars have become a significant part of states’ education budgets, the critics claim, and states cannot reasonably be asked to do without this money.

While several states across the nation have explored the possibility of opting out of NCLB, even to the point of drafting resolutions to do so, Michigan has never entertained the option. Yvonne Caamal-Canul, director of school improvement for the Michigan Department of Education, says: "Our office supports the moral imperative of NCLB. We are working closely with the federal government with the interpretation of the law."

Wells believes the acceptance of federal funding should come with increased accountability. "The responsibilities of NCLB are great, but so is the financial investment made by taxpayers supporting education. If the public is willing to commit large amounts of resources to education, they have the right to expect quality schools," says Wells. "It is irresponsible for the education community to constantly ask for more funding while at the same time fighting accountability measures found in NCLB such as annual testing, expanded choice for parents, additional services for struggling students and access to quality data."

"NCLB is not an unfunded mandate," she states. "First of all, it is not a mandate. Secondly, states are receiving adequate funding to implement the provisions of NCLB."

Wells also says federal funding for education has grown at a record pace. "Total taxpayer investment in K-12 education in the United States for the 2003-2004 school year was over $501.3 billion, exceeding that for national defense," she states. Other supporters of NCLB argue that federal funding for education is at an all time high and point to the 40 percent increase in education funding during the Bush administration. Yet many educators say that even the recent influx of federal NCLB money does not pay for new requirements for comprehensive state assessment systems, highly qualified personnel, sophisticated data management systems and intensive school improvement efforts. Caamal-Canul argues that this is the case in Michigan.

"In order to deliver adequate support of the NCLB requirements, schools and districts have to retool their existing organizational structure," says Caamal-Canul. "This requires human capital to implement, monitor and support NCLB sanctions. Title I monies cover expenses that are tied to the actual education of the children, but not to the expenses for the administration of the sanctions."

The core component of NCLB is grade-level assessment. Michigan already has some testing in place: The Michigan Educational Assessment Program tests are being administered in several grades, and additional testing is currently being added. Michigan already had a functioning data collection process, but given NCLB requirements, it will have to change its methods to include a disaggregation of the data based on gender, ethnicity, socioeconomic level, special education needs, limited English proficiency, homelessness and migrant status.

If a school fails to achieve NCLB’s Adequate Yearly Progress requirements for two consecutive years or more, federally required sanctions include offering students in these schools transportation to more successful schools and to supplemental services in the form of tutoring. But again, infrastructure and manpower to implement such mandates are feared to exceed school district budgets.

"In order to offer the kind of transportation required by NCLB, a district must drastically rethink staffing and equipment," says Caamal-Canul. "Likewise, organizing a multitude of tutoring services to support the ‘supplemental services’ provision will have to require at least a full-time person, possibly more, to fulfill the obligations of such a monumental task."

Caamal-Canul concurs that Title I funding is tight. "Title I monies in Michigan are already in short supply. Monies received this year were based on the poverty census of 2000, when the economy in Michigan was up and the poverty numbers down, and before NCLB was even passed," she reports. "Serving poverty numbers that are far higher in the current economy presents obvious challenges."

A third area of contention is NCLB "flexibility." NCLB supporters say the law allows local communities and schools a great deal of discretion in the way they ultimately use their federal funds. When NCLB was passed, it was advertised as enabling states and local communities to use federal monies to pursue their own strategies for raising student achievement, so they could experiment with innovative ways to improve education.

"When implementing provisions of the law, states and local educational agencies have the ability to choose fiscally responsible and reasonable solutions," argues Wells. "It is important that states, districts and schools work together to develop innovative solutions for implementing the provisions of NCLB. Parents with children in failing schools do not want to be told that the school cannot afford to pay for their child to be transported to another school or to receive special tutoring services. By sharing best practices and pooling resources, (the) states, districts and schools can make NCLB work."

Caamal-Canul agrees that there is flexibility in the spirit of the law. "However," she adds, "no one could have predicted the stratospheric number of situations at the local level this flexibility would result in."

Some states and districts have reported that the law’s promise of flexibility has yet to become reality. "In Michigan," says Caamal-Canul, "we recently attempted to use a flexibility option. We worked closely with the ISDs and found a solution that was legal, research-based and meaningful. Our solution was found unacceptable by the federal government. What’s flexible about that?" Michigan is currently challenging the decision. She adds, "States and districts I talk to all over the country are dealing with this."

Changes in the Future?

The re-election of President Bush and Republican control of the U.S. Congress make it likely that the NCLB will continue to be a key vehicle for federal education policy. The likelihood of modifications to the law is unclear. The new U.S. secretary of education, Margaret Spellings, has said that states will have room to maneuver with NCLB, but that they should not count on receiving waivers.