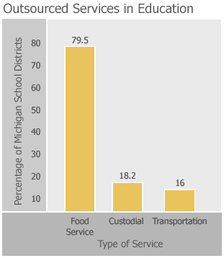 Of the 176 school districts that reported contracting services, 140, or almost 80 percent, stated that part or all of their cafeteria services were outsourced.

In early 2004, Southfield’s school system was desperately combatting declining tax revenue. When a March millage renewal failed to obtain the 20.6 mill, 10-year millage for which Southfield Public Schools had asked, some observers predicted complete dissolution of the school district, and public school officials calculated an insurmountable budget deficit of $68 million. After spending the next three months waging a grass-roots campaign, however, the school district finally received voter approval for a 19.6 mill, five-year millage renewal in a June election. 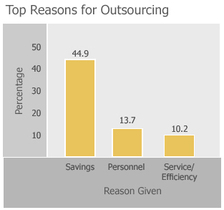 Though the millage rate approved in June is a bit lower than the amount sought in March, it does not do much to alleviate taxpayers’ burden. The 19.6 mill tax rate encumbers the owner of a $200,000 home with over $1,900 per year in taxes. Southfield homeowners may even find it difficult to sell their houses because of the extensive property taxes.

Nor are Southfield’s public schools out of the woods. Even with the millage renewal, the school system will confront an $8 million budget deficit.

In order to best utilize its newly approved funds, Southfield Public Schools should consider the management tool that public schools across Michigan — large and small, urban, suburban and rural — already use: contracting with for-profit, private-sector companies to provide more efficient noninstructional services than a school district can provide itself.

Currently, Southfield outsources only minor services, such as tree removal, to the private sector. The noninstructional services outsourced in many school districts are still provided by district employees in Southfield.

In 2003, the Mackinac Center for Public Policy conducted a survey of Michigan’s 555 school districts in order to assess the extent and effectiveness of contracting with private-sector firms. Of the 517 districts that responded, 176 districts — 34 percent — said they outsource at least one noninstructional service. Of the duties these public school districts outsource (some schools outsource more than one service), the most popular by far is food services with nearly 80 percent employing a private company to manage district cafeteria employees or programs. Another 18 percent contract for custodial duties, and nearly 16 percent do so for their transportation needs.

When asked why they had privatized these services, school districts gave any one of eight general reasons (respondents were allowed to select any number of categories that applied to them). Forty-five percent of school officials listed financial savings as one of their first reasons; 14 percent cited personnel reasons; 10 percent said efficiency of service; 6 percent, contractor expertise; 3 percent, equipment; 1 percent, being forced into outsourcing. In addition, 15 percent said they did not know the reason for outsourcing at their schools; some districts had been outsourcing for so long that current staff were not present when the original decision to privatize was made. Survey respondents frequently listed more than one reason.

The survey results also show that a majority — over 63 percent — of districts that privatize calculated that they did experience cost reductions in at least one of the services for which they contracted. Almost 34 percent were unsure whether they saved money. In some cases, this may stem from a lack of desire or time to track the costs and benefits of competitive bids. One superintendent we spoke to said he didn’t care if his busing contract saved his district money, so long as he didn’t have the headache of managing busing personnel. It is nevertheless better to keep accurate records involving contracts. If you can’t measure, something you can’t improve it.

Only four districts reported achieving no savings thanks to their privatization efforts.

This evidence suggests that by contracting with private firms for noninstructional services, Southfield schools (among others) can reduce their costs and the burden they place on taxpayers for millage requests.

There is no reason to believe that these savings would come at the expense of service quality. The survey also showed that most schools are satisfied with the quality of service the private companies provide them.

Of the 176 school districts that indicated that they outsource, more than 88 percent of them are satisfied with the quality of service they receive from their contractors. Less than 3 percent of outsourcing school districts said they were “not satisfied” with their contractor’s service, while another 16 percent either didn’t answer the question or said it was too early for them to comment on the quality of their outsourced services.

In light of these findings, privatization would seem an easy decision for Southfield or any other school district. Still, contracting can pose political challenges. When questioned about obstacles to privatization, 315 out of the 517 school districts said they did experience some difficulty, with nearly half — 49 percent — responding that unions or current school employees play a major role in obstructing outsourcing. Likewise, another 24 percent listed the community or the school board itself as a significant barrier to privatization.

Southfield fell into this latter camp, listing the “community” as its most significant outsourcing obstacle. But a school district purportedly committed to success should be ready to examine all options for making schooling affordable. The fact that Southfield voters rejected the March millage and passed only the second, smaller one demonstrates that the community expects the district to make the most of every dollar.

After Metro Detroiters passed the Southfield millage and millage requests in other districts, a Detroit News editorial commented, "[Now] that the school districts have received the support of their communities, they owe it to their residents to be both careful and innovative with their finds." Privatization of noninstructional services would fit the bill nicely.

Laura J. Davis is a University of Michigan student who served as a fiscal policy intern for the Mackinac Center for Public Policy in 2004. 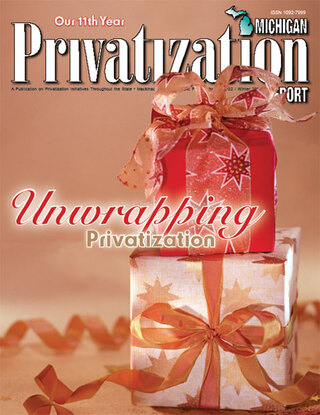