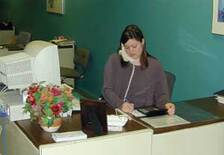 The state of Michigan could save millions of dollars by privatizing the human resources management function of state government. Employees at Michigan-based Kelly Services, such as the one shown here, provide HR solutions to government and business for profit, and should be invited to compete for the right to provide HR work on behalf of the state.

When you think of employment opportunities in Michigan, what first comes to mind? Is it assembling stamped parts on the assembly line at Ford? Is it counting cash at a teller’s window at Comerica Bank? It may be a surprise to people that state government is actually the Great Lakes State’s second largest employer. In order to maintain an enormous workforce to interview and screen potential employees — “human resources” (HR) — it must also operate an enormous HR system.

Maintaining the human resources necessary to keep government humming is a daunting and expensive task. That is why Michigan should take a page from the State of Florida’s playbook and consolidate and outsource numerous HR duties.

The state of Michigan has grown to employ 53,000 people, spread across 20 different departments and 50 office locations. Organizing and managing employees necessary to run a sprawling bureaucracy is not a small task. Years of increased federal and state laws and regulations and administrative rules relative to employment alone have made human resource management Byzantine in its complexity. As a result, chief executives in business — and now government — are turning to outside, for-profit firms that specialize in hiring and managing people.

In August 2002 the State of Florida signed a 7-year, $280 million deal with Convergys Corporation, a private, for-profit business headquartered in Cincinnati, Ohio. In doing so, Florida officials expect to save an average $24 million per year plus an additional $65 million to $90 million by avoiding updates of 20-year-old state-owned HR software. The deal will affect 800 state HR employees, each of whom will receive special consideration for open positions in state government or with Convergys directly.

According to Cynthia Henderson, secretary of department and management services for the state of Florida, outsourcing HR activities began with an order to all department heads from Gov. Jeb Bush. Bush wanted his top officials to find out what business practices were being used in the “real world” that could make state government more efficient and effective in Florida.

The motivation for outsourcing HR was three-fold. First, state leaders recognized that HR outsourcing was common practice in the private sector. “If Fortune 500 firms could outsource their HR units, save money, and improve services, why couldn’t the state?” officials reasoned. Second, the software being used to track state employees and generate paychecks was in such bad shape that Florida officials feared “payless paydays.” Lastly, the terrorist events of Sept. 11, 2001, focused attention on the fact that all of Florida’s state employee data were housed in a central location. What would happen if a catastrophic event — such as a hurricane — whipped through and destroyed all of the state’s employment and pay records? By outsourcing, the state of Florida could contract with a firm that had multi-state locations, where vital information could be transferred in the event of threats to important data.

The precise services that are being contracted include, but are not limited to, a) applicant management including recruiting and selection, and payroll preparation; b) collection and reporting of worker time, leave and attendance; c) administration of workers’ compensation; d) retirement and insurance benefit enrollment; and d) care of state organizational charts. For a full list of every outsourced duty, see the state’s official web site at http://www.myflorida.com/dms/hrm/hrout/HR_Outsourcing_Project.html

Transferring all of the duties once held by state officials to Convergys will occur in a multi-step plan during 2003. On the first day of June, Convergys will begin its administration staffing duties which include recruitment of new employees. One month later it will assume payroll preparation duties for state employees. To the state’s credit, it insisted that the first paychecks be run by the new Convergys system and also duplicated by the old state system to ensure that the new system run by Convergys works as planned. Once the Convergys system proves that it can accurately produce a payroll, the state’s old software system will be shut down.

What lessons can Michigan officials learn from Florida? They could learn about the opportunities to improve government management of state staff while saving money in an area not customarily examined for privatization. Currently, every state department in Michigan runs its own Human Resources department, employing between 1 (Senate Fiscal Agency) and 70 (Family Independence Agency) who are responsible for typical human resource duties, such as processing paperwork on new hires.

It is very difficult to calculate precisely how much Michigan’s human resource apparatus costs state taxpayers every year because the state’s civil service system does not conveniently designate every HR worker as an HR employee. For instance, an executive secretary may work in the HR division of Consumer and Industry Services, but be defined as an executive secretary, not an HR employee.

The Mackinac Center for Public Policy informally surveyed each department and agency listed in the state government telephone directory to estimate how many staffers work in HR, regardless of their Civil Service designation. The total figure came to 559 — including every member of the state’s Civil Service department. This total is slightly less than 1 percent of the state’s workforce, but almost twice Florida’s ratio of HR employees to total state employees.

The average compensation for full-time Michigan state employees, including health benefits, comes to $60,996 per year. Multiplying this figure times 559 employees yields an estimate of what it costs the state just to employ its HR workforce: $34 million. Shaving just 15 percent of this cost by outsourcing - a reasonable goal - would net the state more than $5 million annually.

There is nothing so unique about state-employee HR that makes it imperative that government jobholders perform this duty. In a time of declining state revenues and increasing demands on state programs, wouldn’t it make sense to explore outsourcing of nonessential functions? If so, then state Human Resource management clearly is a candidate. State officials need look no further than Florida for an example of how to do it.

Michael LaFaive is director of fiscal policy for the Mackinac Center for Public Policy, and senior managing editor of Michigan Privatization Report.